One thing for certain is that ‘violent religion of peacers’ aren’t going away and it appears that, contrary to Obama’s claims, they’ve become very emboldened in the last few years.  Check it out …

Former vice president Dick Cheney believes that a terrorist attack even worse than the destruction of the twin towers on September 11, 2001 is probable before the end of the decade.

Cheney appeared on Hugh Hewitt’s radio show on Tuesday and was asked if he thought the United States would ‘get through this decade without another massive attack on the homeland.’

‘I doubt it,’ Cheney said. ‘I think there will be another attack and the next time I think it’s likely to be far deadlier than the last one. You can just imagine what would happen if somebody could smuggle a nuclear device, put it in a shipping container, and drive it down the beltway outside Washington D.C.’

Hewitt wondered if the government could continue in such a scenario and Cheney recalled a Cold War era plan for constitutional government in the event of a nuclear attack.

‘Basically, it involved having a government in waiting if you will ready to go in the event of  nuclear attack on the United States so that we could always maintain the constitutional-based governmental authority,’ he explained. 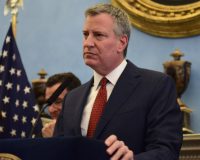