If you believe Hillary and The #NeverTrumpers, Donald Trump is the most corrupt candidate to ever run for the White House and we must all hate him.

He’s pure evil, according to The Hildebeest.

If that’s true then why are Trump’s kids so very impressive? 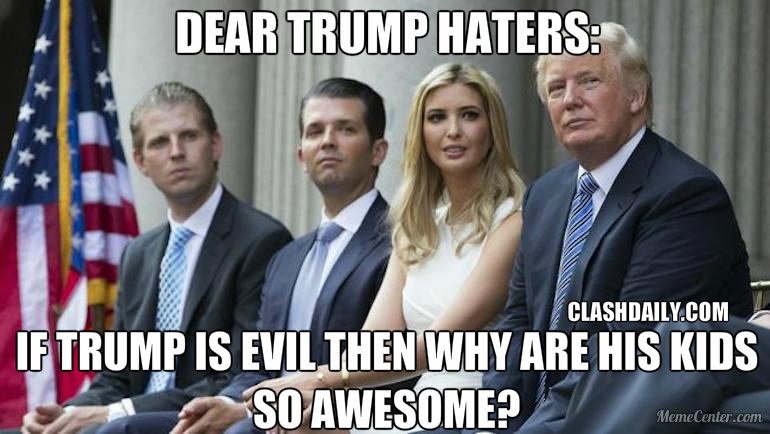 Indeed, if you listen to and believe Donald’s detractors, one would think he would’ve spawned kids that would make Miley Cyrus look like a penitent nun.

If Trump’s such an evil SOB, of shoddy character, with no moral compass, who doesn’t really love America, then why are his kid’s so sharp, solid, smart and a great addition to this grand American experiment in self-governance?

You’d think that such a supposed scalawag would have kids who’d give the Kardashians’ crass clan a run for their sex-tape money. But no. Donald, Jr., Eric, Tiffany and Ivanka are brilliant and I would bet that they make most of the Donald hater’s adult children look like unaccomplished, booger-pickin’ chuckleheads. But I could, very possibly, be wrong.

By the way, I know several people who talk major crap about the comb-over candidate and, yet, Trump’s kids trump their twenty-something louts, hands down. No contest.

I believe Spiderman once said that a “tree is known by it’s fruit” and “wisdom is vindicated by it’s children.”

No, wait… that wasn’t Spiderman. It was Jesus. Stupid me. Anyway … the point is that who a person is gets reduced down to and showcased within their children.

Awww … did that kick your ass?

Look, don’t shoot me. Jesus said it, not moi. Take it up with him.

Paul, not The Beatle, but the Apostle, said that one of the qualifications for a leader in the church is that he must have dignified children, in all things; and if his children are whacked, well … he can’t lead; because if he can’t lead his own house then why the heck should he lead a church?

That’s tight but it’s right. It’s not observed any longer by most churches but it used to be. But I digress…

Succinctly, if your kids are a mess then you shouldn’t tell us how to live. In the words of songwriter, Jonathan Edwards, “If you can’t even run your own life, I’ll be damned if you’ll run mine – sunshine.”

Now, granted, Trump’s not a minister of the gospel but, like I said, I do find it interesting that, not one, but the whole lot of Trump’s brood, are grade A, non-drug-booze-government tit-addled-indolent-leeches but pretty amazing young charges who bring excellence to this game of life and, heretofore, honor to the Trump name.

Finally, as one of my old and wise, now deceased, mentors once told me: “if you want to know what a man is truly made of, then look no further than his children.”

Do you think Trump's kids are a reflection of his character?

In PUSSIFICATION: The Effeminization Of The American Male, Giles takes ‘Crispin’ from the unaccomplished, prissy and dank corridors of ‘Pussville’ up the steep, treacherous and unforgiving trail that leads to ‘Mantown.’