Is President Trump dissatisfied with merely destroying Barry’s legacy that he’s going after Michelle’s, too?

It wasn’t ORIGINALLY part of his agenda to ‘Make America Great Again’, but President Trump has managed, in his first full day in office, to do something that Michelle Obama couldn’t do.

More overweight, hygiene-impaired ‘Nasty women’ were out on the streets than at the Dairy Queen Free Cone Day. (Though, ClashDaily doesn’t have the official numbers on that.) 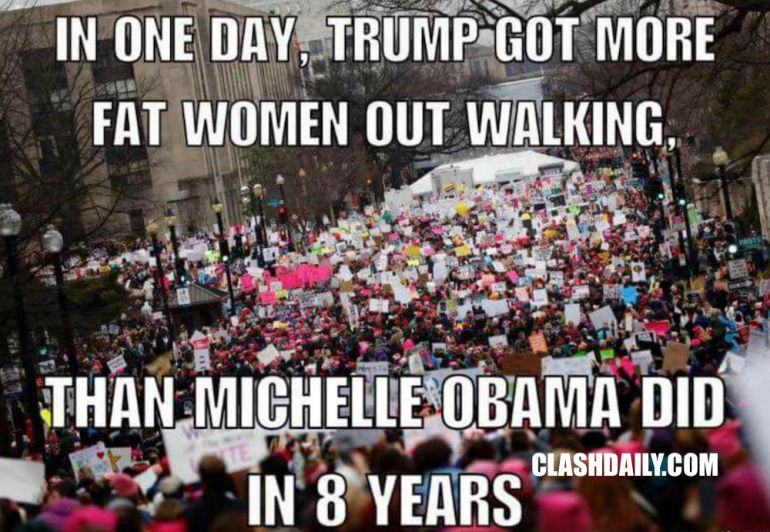 Don’t get me wrong, they do have that right to protest.

But please note, this protest was about two things:

Of course, they were screaming about their vaginas and abortion rights — that whole ‘my body, my choice’ because they fear President Trump’s ‘Right Wing Agenda’ of rolling back Roe v. Wade.

Jesse Watters from Fox News was out talking to protesters, and later had Tomi Lahren and Marcy Stech on his show, Watters World.

He said the protest seemed to be centered around abortion and had a great discussion afterward.

Watch the clip from Watters’ World:

Did you catch that excellent point?

American women enjoy the benefits that many women in other countries don’t enjoy.

Except Israel, of course. WOMEN HAVE RIGHTS IN ISRAEL.

For all their protesting of Trump focussing on America, they sure aren’t thinking very ‘globally’ by only being concerned with American women’s rights.