That old thrill (up Chris’s leg) is gone. But now he’s got a whole NEW way to make an ass of himself!

Guess what. Chris Matthews — like the good media sock-puppet that he is — LOVES Obama almost as much as he Hates Trump.

We all remember the day Matthews famously gave us an up-close look at media objectivity by announcing the Thrill Up His Leg when Obama was first elected in 2008.

He’s still carrying a flame for him all these years later:

The big message of Obama’s farewell speech tonight is that it’s not a farewell. “I won’t stop,” he said. He’s gonna fight on.

Operate with a strong political slant all you want, if you’re up-front about it. Or be objective and be even-handed with politicians on both sides of the aisle. Matthews pretends to be objective, serious news, and yet if he leaned any further left he’d fall over.

His love for Obama has mellowed some over the years, he’s not quite the screaming fan-girl he used to be. Or is he?

So as you watch his reporting of this inauguration, keep this in mind.

Here is a quick index of the sort of Hypocrisy you will see with The Left invoking ‘Literally Hitler’ and ‘disrupt fascism’ etcetera.

NewsBusters put together a montage of Matthews versus Matthews.

In the first segment, you see Matthews going postal when someone makes a Hitler quip about Obama in 2015. He gets on his soapbox saying, essentially, How DARE people play the Hitler card. Why can’t we just disagree about ideas like civilized people?

A little further on you see Matthews taking a VERY different approach… Calling everyone and his DOG Hitler. Because STANDARDS are those things that Democrats apply to OTHER people.

So what did he think of President Trump’s Inaugural Address?

It had a ‘Hitlerian background to it’.

Check it out at the 35 second mark:

This is who the Left REALLY is. They are serial Godwin’s Law violators. 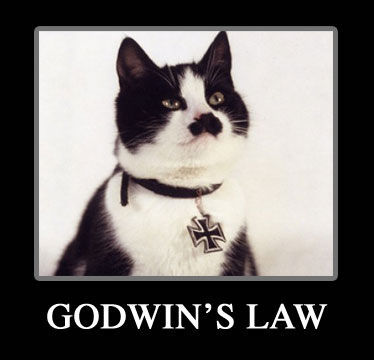 And that’s why we don’t REALLY take them seriously.

About ANY of their wild accusations about us.

If THEY don’t believe their hype… why, oh why, should we?

This Kamala Harris tweet about the border did not age well
April 18th, 2021 Liberty Unyielding