BFFs? Nope. At least, that SURE isn’t how it looked on the video!

The cameramen and reporters wanted ‘the handshake’. 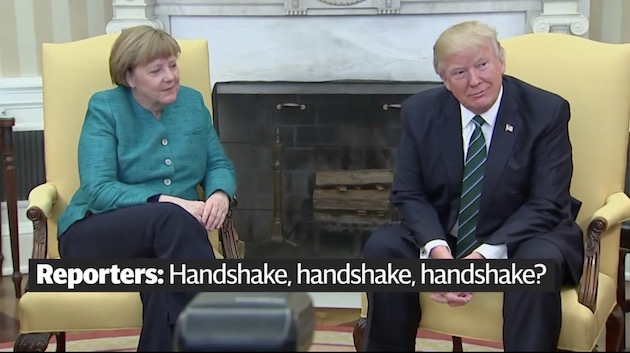 Merkel: Do you want to do the handshake? 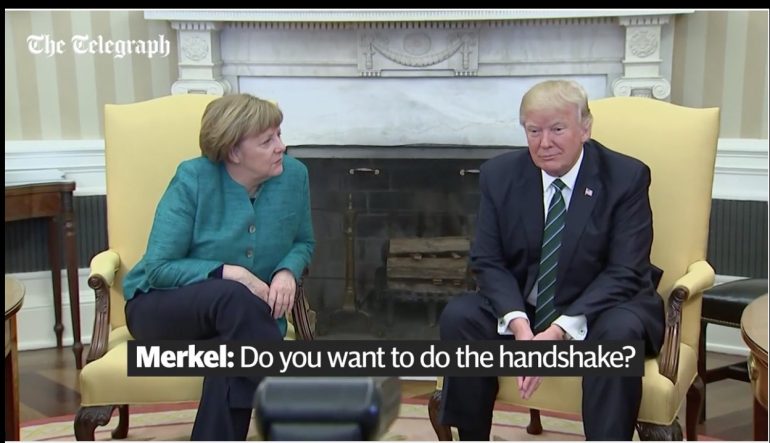 Talks began with a warm welcome outside the West Wing but turned cold as Trump blew off an attempted handshake in the Oval Office and disagreed publicly with Merkel on almost every major international issue.

Trump opened up a joint news conference that his daughter Ivanka attended with a slap at Merkel over her open-door refugee policy. Declaring that ‘immigration is a privilege, not a right,’ Trump said the safety of the countries’ citizens ‘must always come first without question.’

He also pushed for her country to live up to its NATO commitment, stressing the ‘need for our NATO allies to pay their fair share for the cost of defense.’

Merkel told him it has always been her belief that it is ‘much, much better to talk to one another and not about one another’ – a reference to the many disparaging statements Trump made on the campaign trail about her leadership. — DailyMail

Twitter reactions? Of course there were. Here are a few:

Sorry, no handshake for the woman who ruined Germany. pic.twitter.com/jQWxOh3qBq

Piers Morgan gave us some perspective:

It’s never REALLY a question of whether Trump did something wrong, is it? They can work that out later.

First, what did he do? Then they can figure out how to say he was wrong for doing it.

How would it have looked if Hillary were sitting in Trump’s chair?

Gee. Why do you think that is? Could it be because they’re BOTH Globalists? And Trump isn’t?

Yeah. Could be that.