Whoopi, I think its time you sit down and shut your pie hole.

Save your breath for topics like “who wore what and when”, animal tricks, or kissing Joy Behar’s @ss. You need not get into the military decision-making process or armchair quarterback special operations missions after the fact.

“When you sent him there without the appropriate ground support? That was wrong.”

How the hell would you know? What credentials do you have that could back up such a statement?

Watch the harpies on The View:

Let’s quickly dig into your — and The Views‘s opinion of how Carryn Owens was portrayed…you think she was exploited.

Well, I witnessed a standing ovation for a woman who lost her husband serving this great county. I witnessed genuine sorrow and gratitude for Mrs. Owens. I witnessed a military wife that lost a loved one, receive support from the masses in a time of great suffering. Furthermore, I see YOU as the washed up, “my opinion actually matters” douche that is responsible for exploiting her. Do you actually believe people care what you think? I’m here to tell you that the thoughts of a “C-list” actor turned daytime propagandist measures somewhere between a cat turd and a dog turd.

And you feel bad because President Trump exploited her? When have you ever made mention of feeling bad for widows of fallen heroes? When has such a topic ever been explored? I’m seriously wondering because I don’t fall within your viewing demographic of a liberal, man-hating, nothing-is-my-fault, arms-jiggling-as-I-clap-in-the-audience fan base…..oh wait, it hasn’t been until now where you can fabricate a twisted narrative of a standing ovation for a woman that just lost her husband to try and make a President look bad.

For the record, I carried and buried more friends than I care to mention while Obama was President…I don’t recall you or The View‘s outcry for them and their families.

You and your hens on The View need to go kick rocks and cackle about something else. Leave war heroes and their widows out of your mouth, it makes you look dumber than a bag of hammers.

Oh, and how can I forget my best buddy, the mouth breathing Michael Moore… YOU wanna talk about exploiting people?

Let’s run the numbers and I’m not talking about your bathroom scale:

Michael Moore in TrumpLand
Where to Invade Next
10%: What Makes a Hero?
Occupy Los Angeles
Capitalism: A Love Story
Slacker Uprising
Sicko
Fahrenheit 9/11
Bowling for Columbine

At this point in time, after YOU’VE exploited all the people over the years to produce this slanted trash listed above, that morons actually refer to as “documentaries” exactly how many of those people have you helped? My guess would be slim to none. Are you spending time and money rebuilding Detroit? Combating school violence? I’m doubtful of any positive influence you’ve had regarding topics you’ve touched with your greasy sausage fingers.

Be honest, you’ve spent your entire career brainwashing high school/college age morons and exploiting people for money. There you sit, on an oversized chair and have the audacity to pervert an amazing moment where Carryn Owens was celebrated? You implying that you feel bad for her is enough to piss anyone off. You stated in an interview that this was done as

“…sort of an ‘f-you’ to the people who are criticizing him for this [the Yemen raid]. And this poor woman, this widow who has lost her husband, she is in desperate grief right now.”

Well, what are you doing now? Looks to me that you’re the one actually exploiting this woman for your own benefit. You think you actually know what you’re talking about, sniper hater? Well, why don’t you stop by Walter Reed Medical Center and see what kind of welcoming a world-class turd such as yourself receives.

You don’t speak for the military community, you never have and never will. 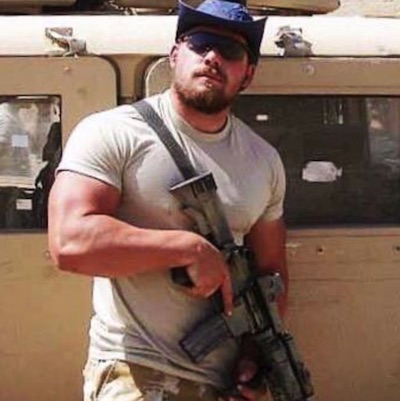 We know you did.

Bryan Sikes has NOT been pussified.

You need to be more like Bryan.
ClashDaily.com’s, Editor-In-Chief, Doug Giles addresses our nation’s abysmal wussification in his NEW book …