In an age where it is anti-woman (and therefore a moral outrage of the highest order) to ‘shame’ a woman for her appearance (age, looks, weight, whatever) the Liberal Left gives themselves a free pass when mocking Republicans.

A self-made woman who owes the Left nothing and — worse — helped Trump defeat their beloved harpy in November does NOT get such considerations.

She is to be mocked in the most insensitive and mean-spirited ways possible.

In this case, get an old man to play her on ‘comedy’ television.

He has played a mutant with superhuman abilities, the captain of the Starship Enterprise and Macbeth, but fans of Patrick Stewart are now hoping the classically trained actor will take on his most difficult role to date.

After seeing a photo of Stewart in drag from last year, many on social media are urging Saturday Night Live to cast the British thespian as President Trump’s White House counselor Kellyanne Conway.

That would make for the third member of President Trump’s team to be played by a member of the opposite sex, with Melissa McCarthy doing guest appearances as Press Secretary Sean Spicer and Kate McKinnon playing Attorney General Jeff Sessions.

Stewart was photographed in drag last April during an event for his Starz comedy ‘Blunt Talk.’

He appeared in drag on an episode of the show’s second season, and said at the time: ‘I think I looked rather glamorous.’

Stewart also admitted that his wife had to lend him a helping hand to walk around in his heels.
Read more: Daily Mail

Here is a side by side of Patrick Stewart and Kellyanne: 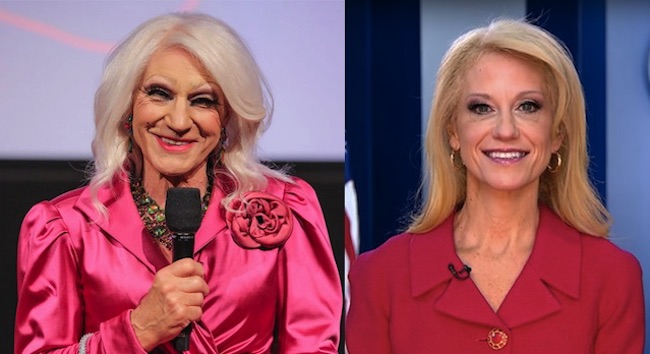 Was it only two years ago that Salon printed THIS headline about Michelle Obama?

The right wing’s hideous crusade against Michelle Obama has completely fallen apart
For years, the likes of Rush Limbaugh have lobbed racist, sexist invective at the First Lady. But it didn’t matter
HEATHER DIGBY PARTON —Salon

That was a typical leftist response to us criticizing their precious ‘queen’ about anything.

So, when the RIGHT takes digs at a Liberal woman, it’s racist and sexist invective.

But we are supposed to think this SNL stunt is high comedy and NOT malice or political sour grapes. Sure it is.

The Right has no war on women. But the left? They sure as HELL have a war on Republican women.

So will we expect to see Samuel L Jackson in drag as Michelle Soon? At least that makes some sense, since Michelle is kind of man-ish.