Wikileaks just OUTED the CIA … why the HELL was OUR Government spying like THIS?

Right in the middle of a News Cycle Wiretap Spat between Trump and the Democratic/Bureaucratic/Journalistic official opposition, we’ve seen an EXPLOSIVE release by Wikileaks.

If their claims are true, it will change EVERYTHING we think we know about the Government’s habits of spying on citizens.

It might even shed light on where or how our government acquired certain information about President Trump and his associates /appointees that should NEVER have been given to the press.

All those denials about Obama’s administration being ‘constrained’ by laws that prevent him from ordering anything like a wiretap? They’re now meaningless.

Before we continue, remember — whatever ELSE you may think of Wikileaks, they have one thing they can boast about. Nobody has EVER proven as fakes any of the documents they have released. Do you know of ANY major news outlet (print OR TV) which can say the same?

Here’s what Wikileaks has tweeted about it:

U.S. Consulate in Frankfurt is a covert CIA hacker base https://t.co/K7wFTdlC82 pic.twitter.com/oqjtcVb56E 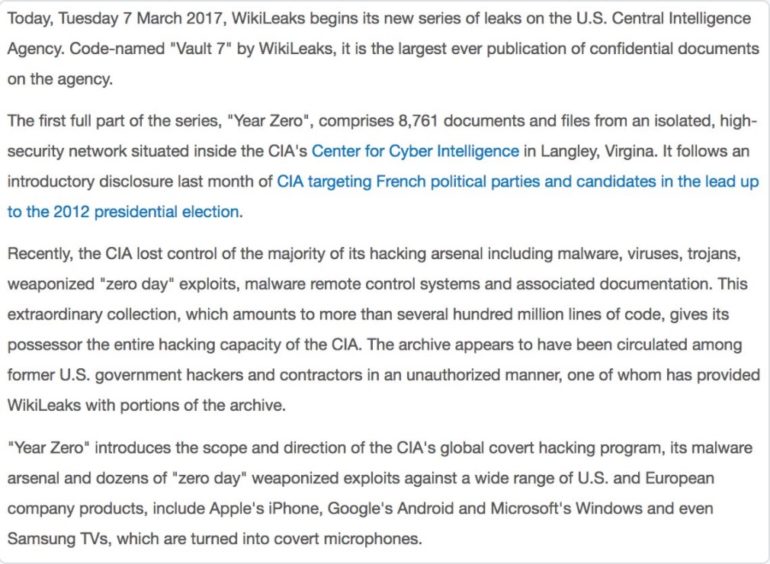 Wall Street Journal has stepped up and called the leak ‘authentic’.

There’s a LOT more to this story. The file is huge.

Where are all those leftists that embraced an ever-growing and increasingly-centralized government NOW?

We’ve heaped more and more powers into a class of people who the ordinary person has no means of keeping in check — they’re not even elected — and even the elected people who are SUPPOSED to provide oversight? Have encouraged rather than opposed this.

Which is to say, they could quite easily look at their own hacks of Americans (or anyone else) claim it was done by the Chinese, Iran or the Russians and we’d have no way to disprove it.

A ‘substantial library’ of digital espionage techniques borrowed from Russia and other countries is in the data as well, WikiLeaks said.
WikiLeaks claims each technique the CIA has created ‘forms a “fingerprint” that can be used by forensic investigators to attribute multiple different attacks to the same entity’.
‘The CIA’s Remote Devices Branch’s UMBRAGE group collects and maintains a substantial library of attack techniques ‘stolen’ from malware produced in other states including the Russian Federation.
‘With UMBRAGE and related projects the CIA cannot only increase its total number of attack types but also misdirect attribution by leaving behind the “fingerprints” of the groups that the attack techniques were stolen from.’ —DailyMail

In fact, they SPECIFICALLY use other nation’s malware and techniques — including the Russian Federation — so it would be pretty straightforward to ‘frame’ another country.

In fact, that tactic of leaving foreign ‘fingerprints’ — and Russia — are specifically named.

What a coincidence! We’ve been hearing a LOT about Russian involvement in everything lately.

If it really IS a coincidence.

The CIA has all SORTS of ways to spy on us. Without our knowledge. Through our phones. Our Smart TV’s. They’ve even hacked our smart cars.

And yet the relentless drumbbeat of the news media is building a narrative that President Donald J. Trump is somehow aiding and abetting a foreign despot (depsite close connections Clinton’s inner circle had with them — BUSTED: Russia’s Biggest Bank Paid MAJOR Democrat To Fight US Sanctions).

The REAL abuses of American governmental power don’t need to look across the ocean to Moscow. They can look right here at home.

It was bad enough when we were violating international agreements by surveilling foreign allies and leaders under Hillary.

But are unaccountable people ALSO spying on our private lives, in violation of the Constitution?

Wars have been fought over less. We deserve answers, and we deserve them now.

This happened under Obama’s watch… and perhaps earlier.

Do you STILL love the ‘progressive’ Big Government?