Seven reasons that prove Bernie Sanders is full of it.

Bernie made a fool of himself on April Fool’s Day.

Though that’s no different from what he does on any other day, he was almost a BIGGER mascot for April Fool’s Day than Rachel Maddow who was born on Aprill 1, 1973.

Check out his crazy tweet longing for the good ol’ days of 1979:

Here are 7 Reasons that prove he’s full of crap, courtesy of Ben Shapiro of The Daily Wire:

1. There Is No Such Thing As The “Top 0.1%.” The Left’s myth of a tiny oligarchy that makes the highest income year after year is just not true. There are dramatic shifts in who is in the top 1% year-to-year. This is true across the board. The Great Thomas Sowell wrote: ‘A University of Michigan study showed that most of the working people who were in the bottom 20 percent of income earners in 1975 were also in the top 40 percent at some point by 1991. Only 5 percent of those in the bottom quintile in 1975 were still there in 1991, while 29 percent of them were now in the top quintile.

‘America’s “middle class” did start largely disappearing in the 1970s, but it was because they were moving up to a higher-income category, not down into a lower-income category. And that movement was so significant that between 1967 and 2009, the share of American families earning incomes above $75,000 more than doubled, from 16.3% to 39.1%.
Read more: AEIdeas

3. Income Has Not Stagnated For Americans.
The Brookings Institute has an article about the ‘Myths of Inequality and Stagnation’ citing Congressional Budge Office numbers:

4. Income Mobility In The United States Remains High. The United States is still the ‘Land of Opportunity’, and when people make decisions to succeed, they can succeed. There are factors that will limit the ability to succeed, including having children out of wedlock, but once these factors are considered, Americans are still on-par with Socialist wealth-distributing countries in Europe.

5. Global Poverty Has Dropped Dramatically. Extreme global poverty has dropped to below 10% of the world’s population. In 1981, 44.3% of people lived on less than $1.90 per day. Was it socialism that changed things? Nope. It was capitalism.

6. Life Expectancy In The United States Has Risen Dramatically. Bernie claims that the wealthiest 1% are the cause of all suffering, life expectancy has risen in the last few decades.

7. Living Standards Have Risen Dramatically In The United States. Even the poorest American is wealthy compared to the average citizen in 1979. Modern appliances are in pretty well every home. Not only does just about every home in the United States have a television, more than 80% have a DVR/TiVo. Cell phones are practically ubiquitous, with even young children with their own device.

So, perhaps Bernie is waxing nostalgic for the bell-bottoms, long hair, and gas lines of 1979, but it wasn’t a better time to be an American.

And the best part?

It’s going to be even better under President Trump. 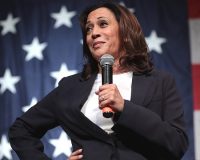 Free Universal Rent? – Plus Policies Like It Announced In California Will Wreck Our Economy
June 23rd, 2021 Sons of Liberty Media