What IS it about people setting things on fire lately?

The interstate – a major artery for the US South that runs through the heart of Atlanta – is closed indefinitely.
‘This is about as serious a transportation crisis as we can imagine, 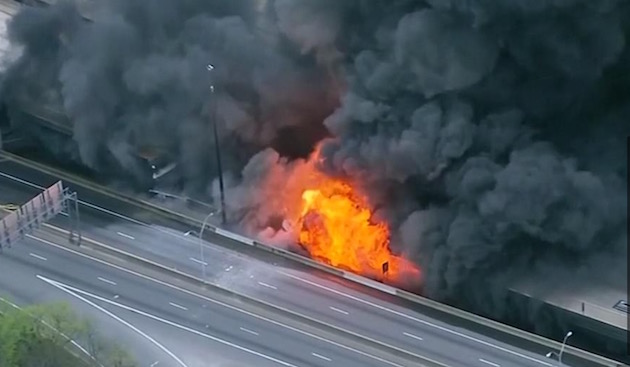 He identified them as Basil Eleby, Sophia Bruner and Barry Thomas. Eleby faces a charge of criminal damage to property, while Bruner and Thomas were each charged with criminal trespass.
‘We believe they were together when the fire was set and Eleby is the one who set the fire,’ Florence told the Atlanta Journal-Constitution.
Eleby appears to have a criminal past which included a cocaine arrest.
Florence would not discuss how the fire was started or why, saying those details would be released as the investigation progresses.
However, he said the suspects used ‘available materials’ at the site.
All three may have been homeless, Florence added, although it is not clear whether they had lived at the site beneath the highway, according to the AJC. —DailyMail

Others pointed to the monumental stupidity of storing the flammable materials under the busiest road in the region. It takes GOVERNMENT to make a blunder THAT big.