In case you missed it, 23-year old, Belen Sisa, claimed that she was an illegal alien and had paid $300 in taxes to the state of Arizona.

It was a classic case of argumentum ad misericordiam also known as an ‘Appeal to Pity’ — a logical fallacy that we all know. The Left uses it all the time. It’s your typical ‘Sob Story’. 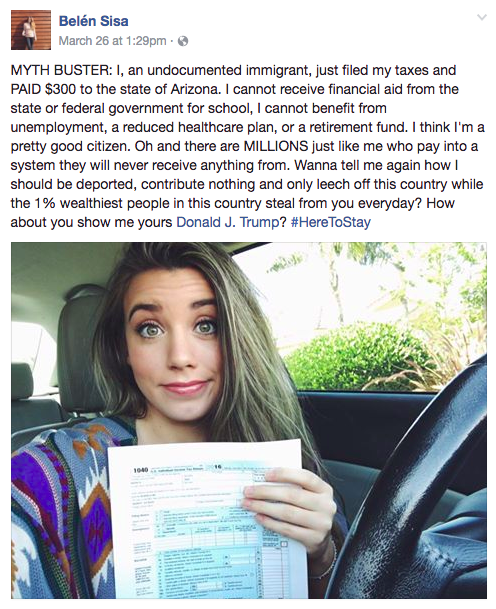 James Allsup just couldn’t let Sisa get away with it when he spotted the form that she was holding up was a federal, not state form.

And it was blank.

Sisa claims she is working legally because she is a ‘Dreamer’ and received a work permit through DACA.

Belen, that, honey, is documentation.

So, tell me again how she’s not benefitting?

She’s not being deported because she was brought over as a child, and the government allows her to work, attend school, and generally live her life here… despite her illegal status.

She now has a quasi-legal status.

The wealthiest 3% pay 52% of all income tax revenue, you moron.

There are some YUGE problems with Belen Sisa’s claim.

Thanks for pointing them out James Allsup!