Jobs were a big part of why Trump was elected, right?
The markets are responding!

Hey Hillary, there’s a message for you from Bill: 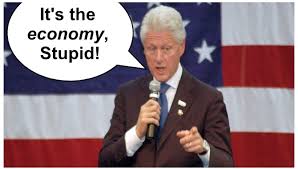 Oops, too late. She lost already. But that’s Ok…

PRESIDENT Trump has been busy cutting red tape. And business is loving it!

American businesses created far more jobs than expected in March.
The private sector added 263,000 jobs during the month, according to the monthly report from ADP and Moody’s Analytics said. Economists had forecast just 185,000 new jobs in March, according to a survey conducted by Reuters.

February’s jobs number was revised significantly down to 245,000 from the preliminary report of 298,000. That means that jobs creation appears to be picking up steam rather than slowing, as many economists expected after the initial strong start to the year.

Jobs creation is picking up steam.

Where DID all those NeverTrump gloom-and-doomers run off to?

Their crow is ready. Bon Appetit!