Un-dirty-word-believable! This woman deserves the award for WORST Mother Ever.

Tania Chikwature, 32, from Peterborough, England, was driving three times over the limit when she flipped her car and had it fly 14 feet into the air to land on its roof.

She had been swigging vodka from a bottle while she was driving.

She had her 19-month old son in the car at the time.

The car was speeding in the on-coming traffic lane, crashes into a roundabout, launches 14 feet into the air, flips, hits a tree and lands on its roof.

Fellow motorists rushed to assist and found the drunk woman was trapped in her car.

The monster of a mother didn’t refer to her child or even ask about him after the crash.

Tania Chikwature, 32, was three times over the limit when she crashed her grey Nissan Qashqai on the A606 outside Peterborough on December 12.

Her 19-month-old son survived the accident and was found hanging upside down in his car seat.

He was pulled from the vehicle by witnesses and she was later cut out by firefighters.

A bottle of vodka was discovered in her car…

…Chikwature refused to provide a breath sample at the scene and police only discovered she was three times over the limit when they took a blood test five hours later. 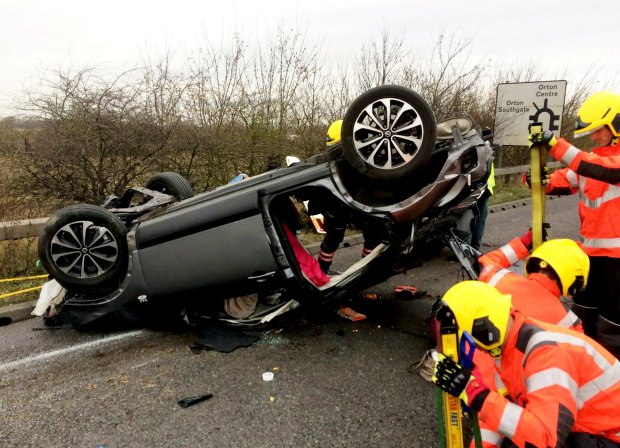 It’s a miracle that there were no fatalities.