By Regis Giles
Founder of girlsjustwannahaveguns.com

A foggy day in London town. That is what was in mind when visiting England. Nothing but rain, clouds, fog and just a glimpse at the sun. Most pleasantly, that was not the case. The sun was shining and the weather was good. Cool winds would be the only complaint.

Of course, the day of muntjac hunting that all had to change in a split moment to give a proper welcome to the British countryside; and boy, was it a dramatic change!

Hunting in West Stow, a land that adjoins the Kings Forest outside of Cambridge, is one of the most picturesque places in the world. Rolling plains, ancient architecture and vast woodlands bring you to a different time. A time where kings and queens gathered together with the ladies and lords of the court in huge hunting parties. Dressed to the nines atop their horses, with hounds sniffing about on the ground, waiting for the trumpets to blow and the hunt to commence.

Stalking muntjac on this land, it felt as if a time portal had taken me to that era. The only thing keeping me in the present was the very modern .223 rifle in my hands.

The first stalk was just a warm up, or a very literal brusque, cool down. Signs of game were present, but only on the ground. Plenty of tracks and fresh droppings about, just no eyes on the barking deer. Andrew Comings, my guide for this evening’s hunt, wanted to get the action started so he devised a plan to flush out the game.

Placing me behind an enormous tree, that is possibly older than America, I sat in wait while Andrew — along with his loyal dog Lexi — went to the opposite end of the forest and clapped his hands; causing a disturbance and the muntjac to move.

The very moment he left, there was a great roar. It wasn’t coming from an animal, but from a massive cloud in the sky. Along with that roar poured out rain and hail. Yes… hail. The storm didn’t last long, but all I thought in that moment was, “welcome to England”.

Nothing came of that flush, but the second attempt on a munty proved much more successful.

This small, hooved, fang-toothed male was about forty yards away when we spotted him, pacing back and forth in the forest. These deer don’t sit very still; they’re small and skittish, like the African duiker or a hypoglycemic kid who ate a whole bar of chocolate Ex-Lax.

So, due to their behavior, when one gets a shot you take it quickly.

Following this male in my scope, I waited for the right opportunity as Andrew made his calls.

He stopped pacing back and forth, giving me the perfect pose. A nice broadside shot with zero brush in the way.

Without hesitating, I squeezed the trigger and shot; dropping him in his tracks and saving Lexi some energy from having to sniff him out. It was a very pleasant sight to see because, typically, these tiny deer bolt after being shot.

Walking up to him, I realized just how small they actually are. Muntjacs (Muntiacus) are an Asiatic deer that weigh from 33-77 pounds and stand about 15-25 inches at the shoulder. They are fanged and the males have horns while the females have nubs on top of their heads. Muntjac breed year-round, with no seasonal rut. The population that exists in England today is the Reeves’ Muntjac, introduced in the nineteenth century. 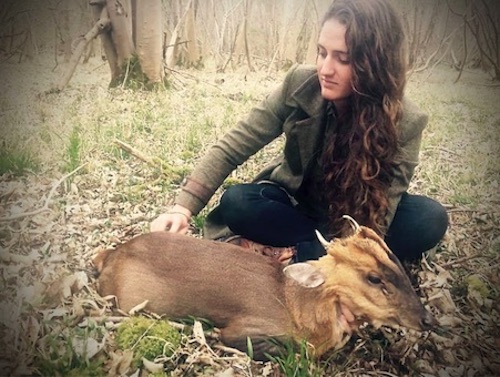 Feeling the fangs of my muntjac was quite impressive, as in razor sharp. They use them to fight for territory. These tiny deer certainly can do some damage if they want to and I’m sure the other animals in the area avoid a grapple with them.

Along with a huge muntjac population, there are fallow, roe and the majestic red stage deer all in the area; and that is just the hooved creatures to hunt.

The English countryside is certainly NOT struggling to keep their populations alive. Had I had more time to hunt, any and all of the species that were in season would have been hunted.

England brings a certain nostalgia and there is nothing more wonderfully beautiful, to me, than to go hunting on land that has centuries of recorded history. Just take any metal detector out on the plains and you will dig up some Roman coin or priceless piece of history. It makes one wonder what world leaders, great men and women of history, used to do as you were doing, just with a different weapon and maybe a different method.

Hopefully, this beautiful tradition of hunting will continue on for many more centuries to come. It would be a shame to see it disappear.

If you love hunting you need this book.

It also makes a great gift for that person you know that’s still not convinced that hunting is a great sport.