To the great pleasure and relief of some of the suffering civilians who live there, Assad’s gas attacks did NOT go unanswered.

(Even though we were told in 2013 that Russia would see to it that Assad has disposed of all their chemical weapons.)

Susan Rice and other former Obama administration officials are taking heat for past claims that their 2013 Syria agreement successfully led to the Assad regime purging its entire chemical weapons stockpile — in the wake of this week’s alleged sarin gas attack.

On Thursday, President Trump launched a targeted strike at a Syrian airfield in response to what he called a barbaric chemical attack on innocent civilians at the hand of Syrian President Bashar Assad.

“There can be no dispute that Syria used banned chemical weapons, violated its obligations under the Chemical Weapons Convention and ignored the urging of the U.N. Security Council,” Trump said. —Fox

Trump wasn’t the only president delivering payloads to the enemy overnight. 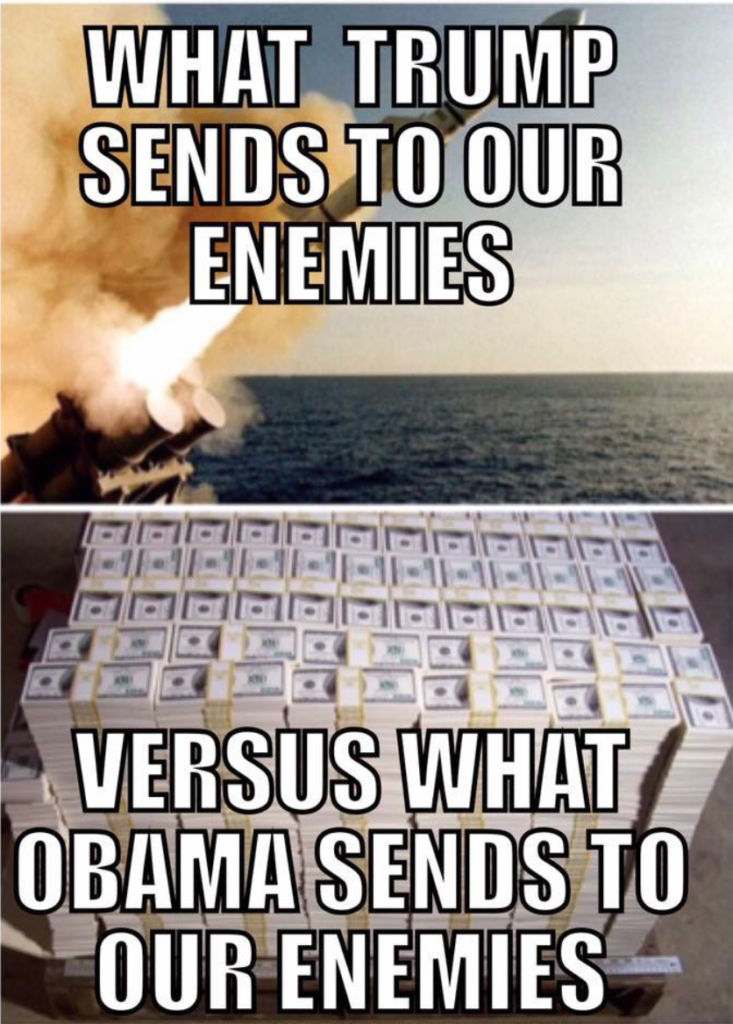 But Trump’s payload exploded on delivery.

The money Obama delivered. For ransom. No, it’s not for ransom. Ok, it was connected to the release of prisoners and will thus incentivize the ransoming of other Americans in the future.

A plane load of unmarked bills getting sent to Iran in the middle of the night, the world’s leading state sponsor of terrorism™ … What could POSSIBLY go wrong?

This week, The Weekly Standard reported that key members of the Senate Foreign Relations Committee, including its chairman, Sen. Bob Corker, were not told about wire payments to Iran, even after Obama said the United States had to send cash because such wire payments were not possible.

Politico reported this week that the United States had been wiring cash to Iranian banks long before the cash payments were flown to Iran. —NY Post

Except maybe Obama’s unmarked bills delivering a payload that blows up in somebody ELSE’s backyard.

But hey. The money is untraceable. So Obama can sleep with a clear conscience.

Because hostile nations fear and respect a pussy, rather than any show of strength.