Isn’t it funny what happens when the President says that we should enforce our laws?

It’s like people don’t want to get detained and deported.

Homeland Security chief John Kelly said in written testimony to Congress that the number of illegal alien captures on the border have fallen precipitously, a sign that fewer foreigners are making the attempt to cross illegally into the U.S.

Kelly reported that fewer than 12,000 people were caught crossing the border illegally in March, an enormous drop of 72% from the 43,000 figure of those captured in December, before Trump’s inauguration. The AP reported that this was the lowest monthly figure for at least 17 years.

Previously it had been reported that illegal crossings had dropped by 40% from January to February, which had been called “unprecedented” by border officials.

“U.S. Customs and Border Protection is releasing illegal border crossing data through the month of February and the numbers show an unprecedented decline in traffic,” the report read. “From January to February, the flow of illegal border crossings as measured by apprehensions and the prevention of inadmissible persons at our southern border dropped by 40 percent.”
Read more: The Blaze 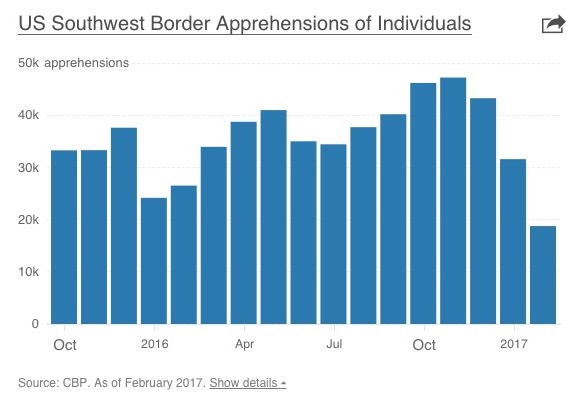 And this is before The Big Beautiful Wall.

Just imagine what it will be like once it’s built.

The Left has constantly lectured that people won’t stop crossing the border, so we need ‘paths for Citizenship’ and Sanctuary Cities, and blah, blah, blah…

We just needed someone who would enforce the law as it stands.

Who’d have thunk it?