Freaking out over this? Looks they’re REALLY in a twist over how well his tour is going.

You can almost HEAR the wheels turning… ‘Quick how can we turn this story negative?’

Trump has a big speech where he calls out Iran, and he resets the us-and-them narrative with the world at large solidly against the reprobates in ISIS.

He was wildly welcomed. Melania didn’t kowtow to the requirement of headscarves. Treatment of minorities and women were featured prominently.

They downplayed mention of Trump’s receiving Saudi Arabia’s highest civilian honor. As they did the fact that he made a very deliberate direct flight between Riyad and Tel Aviv.

Then he went to Israel, where he was also given a grand welcome.

So what story do the petty press run? This isn’t the Onion. This is a headline from the ‘legitimate’ press, the kind Politifact and Snopes won’t reject as fake:

Swat team: Melania slaps at President Trump when he tries to hold her hand after pair arrive in Israel on Middle-East peace trip

Video of President Trump touching down in Tel Aviv on Monday shows the First Lady very clearly slapping at her husband when he tried to hold her hand at Ben Gurion Airport.
Melania was walking a half-step behind her husband at the time and managed to rebuff his advance without showing any clear emotion or breaking her stride, while the commander-in-chief responded by using the rejected hand to carefully adjust his tie.
It was unclear if this unexpected resistance was the result of any personal turmoil, or simply because of the carpet’s narrow size. (Source)

See that last line? It’s an actual admission that there isn’t a story here. Everything said is coming directly out of Chris Spargo’s petty imagination. 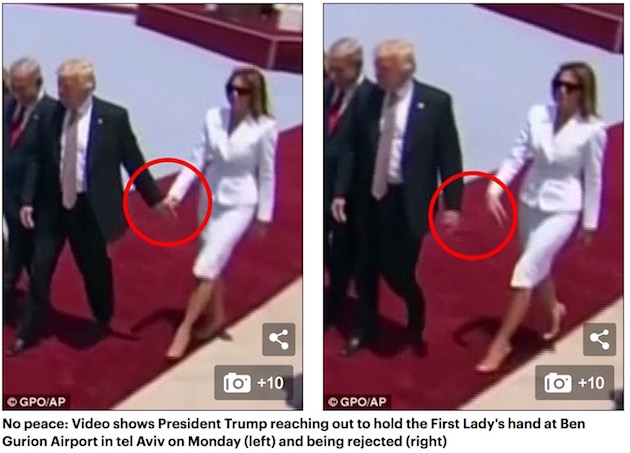 Translation? Technically, it COULD be nothing.. but what if it really IS something juicy?

That’s not journalism. That’s paparazzi, tabloid talk. This guy would be more suited to work for TMZ.

Does he rescue his claims with something to validate them? Let’s read on!

Whatever underlying issue led to the First Lady’s rejection of her husband’s attempt to hold hands appeared to have resolved itself by the time the two were leaving Tel Aviv on Monday.
Melania could be seen graciously extending a small part of her hand to President Trump after the pair said farewell to Prime Minister Benjamin Netanyahu and his wife Sara.
Video showed the First Lady as she wrapped two of her fingers around one of her husband’s fingers for a few seconds while leading him towards their awaiting helicopter.

The rest of the article (it keeps going!) catalogs whose hands are being held, and when.

Of course, one commenter in the video clip makes the point so obvious it takes a ‘journalist’ to miss it:

Public displays of affection, between males and females, including hand holding, are considered offensive in some Arab countries. Perhaps she was just being correct.﻿

Because handholding is the news REALLY worth reporting during this historic visit.

Do you wonder why the public isn’t taking them seriously anymore?

He should read this, and get his head on straight.