This oughta be fun…

Rich Lowry at the New York Post has written an interesting column about the ‘Russian Meddling’ in the highest offices of a new Presidential Administration: (Emphasis added)

The circumstantial evidence is mounting that the Kremlin succeeded in infiltrating the US government at the highest levels.

How else to explain a newly elected president looking the other way after an act of Russian aggression? Agreeing to a farcically one-sided nuclear deal? Mercilessly mocking the idea that Russia represents our foremost geo-political foe?

Accommodating the illicit nuclear ambitions of a Russian ally? Welcoming a Russian foothold in the Middle East? Refusing to provide arms to a sovereign country invaded by Russia? Diminishing our defenses and pursuing a Moscow-friendly policy of hostility to fossil fuels?

Right, that was when Barry was the Commander-In-Chief.

Let’s take a look at the Russsian accommodation chronologically.

– After the 2008 Russia-Georgia conflict, there was the infamous ‘re-set’ that diminished our nuclear arsenal, but not theirs

– Obama then made a deal with Russia’s ally, Iran to keep their nuclear program going

(and wasn’t there something ELSE involving Iran? Oh yes, who could forget:) 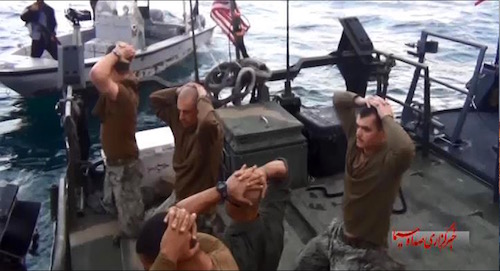 – During the ‘Red-Line’ fiasco, he accepted Russia’s help in Syria

– Barry cut US defense spending and cracked down on ‘fossil fuel’ use — which an economy dependent on Oil revenue, like Russia would applaud

Put all of this together, and it’s impossible to conclude anything other than that Obama was a Russian stooge — and not out of any nefarious dealings, but out of his own naïveté and weakness.

Obama didn’t expect any rewards when he asked then-Russian President Dimitri Medvedev during a hot mic moment at an international meeting to relay to Vladimir Putin his ability to be more “flexible” after the 2012 election; he was, to put it in terms of the current Russian election controversy, “colluding” with the Russians in the belief it was a good strategy. His “kompromat” was his own foolishness.
Read more: New York Post

Juxtapose that with President Trump saying, ‘Hey, maybe it’s a good idea if our countries could get along.‘

Looks like Barry was the one with a pro-Russia agenda, doesn’t it, Comrade?

Remember this little ditty from back in the day?

This was the 2008 Obama Messiah song by Glenn Beck to the tune of the Russian National Anthem.

It seems a little prophetic now, don’t you think?