There’s a Dirty Little Secret Merkel doesn’t want you to know. And the data doesn’t lie…

The Globalist Left is very good at telling us about the moral imperative of throwing open our doors and letting people march in, unchecked.

Even our Court system is getting in on the game, insisting that Trump has no right to single out specific countries in a travel ban.

And for those who object for reasons of security, etcetera, people like London’s Muslim Mayor are announcing that Manchester’s bombing is just part of the New Normal that we need to get used to.

But, since it’s trendy these days to say how we not only rely on science but that we (somehow) LOVE science, let’s look at the data, shall we?

Here’s a handy graphic for people who don’t have time or patience for tables and datasets, even though they ‘effing love science’. Does anything jump out at you? 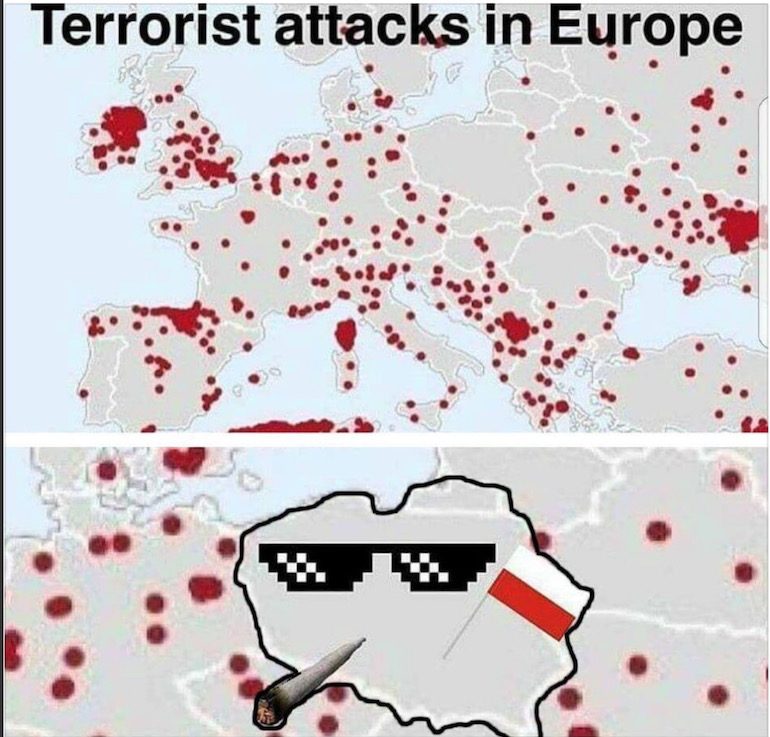 Europe appears to have broken out with a bad case of measles, except for one area. Poland.

Is anything in Poland happening differently than the rest of Europe?

There’s THIS story about Poland telling Brussels to pound sand.

Do you think it’s ‘scientific’ to dismiss the fact that the biggest empty space on the map — where no terrorists blew themselves up — ‘just happens’ to be a country that is NOT throwing out the welcome mat to the ‘refugees’?

And shouldn’t this little detail factor into our OWN border conversation?