The victim’s own PARENTS were barred from the courtroom during sentencing!

Is THIS the new face of ‘tolerance’?

They had no trouble luring, raping and filming the devastating attack on a defenseless little girl, but answering for it in court? It has given the little darlings ‘PTSD’.

Sharia law in Idaho. The three Muslim refugee boys who plead guilty in the heinous sexual attack of a five-year-old girl in Idaho were sentenced yesterday. No jail time. The judge barred everyone in the courtroom, including the victim’s own parents, from speaking about the case and threatened anyone with serious consequences if they violated his edict. Unheard of.

The sexual assault occurred at Fawnbrook Apartments, in Twin Falls, when a 5-year-old was lured into a laundry room, stripped of her clothing, urinated on, and orally and anally raped while the oldest boy filmed the entire incident.

Now, following a sentencing hearing Monday at the Snake River Juvenile Detention Center in Twin Falls, Judge Thomas Borresen of Idaho’s 5th Judicial District issued a gag order barring everyone in the courtroom from talking about it.

The judge was pretty damned serious about that ‘gag order’, too. How serious?

The lawyer who said he was ‘unsatisfied’ with the verdict is facing contempt of court charges.

There’s a reason that ‘Lady Justice’ wears a blindfold. A judge is supposed to be guided by principle, not ideology. And from the outside looking in, it’s hard to imagine ANY principle that would reduce the sentence to ‘sexually lewd conduct’.

The travesty of justice in Idaho is now complete. In the summer of 2016, a 5-year-old girl was sexually assaulted and urinated upon by three Muslim migrant boys in Twin Falls, Idaho. Since then, instead of getting justice, the victim’s family has been abused by law enforcement and governing authorities as if they were the criminals – because what happened to their little girl contradicts the politically correct narrative about Muslim migrants. On Monday, the perpetrators were sentenced, and the final injustice was done to this poor girl.

The injustice began in the proceedings at the Snake River Juvenile Detention Center in Twin Falls when Judge Thomas Borreson of Idaho’s 5th Judicial District ordered the little victim’s parents to say nothing to anyone – ever – about what was said in the courtroom Monday, or to disclose the sentence he gave to the savage attackers. He did allow them to say that they were unhappy with the sentencing, but threatened to jail them for contempt of court if they disclosed why they were unhappy with itBut even though the victim’s parents were not allowed to talk to me, there were 12 to 15 people in the courtroom who saw and heard the whole sorry business. I was informed of what happened by an anonymous source inside the courtroom – and the more I heard, the more I understood why this judge wanted to keep all the proceedings secret.

Janice Kroeger, the senior deputy prosecuting attorney, who was supposed to be trying these boys for their crimes, defended the boys and repeatedly attacked Lacy, the victim’s mother. A therapist for the boys was present, as well as a parole officer and a detective. Everything that was said was designed to portray the perpetrators as victims. Throughout the proceedings, they were repeatedly called victims, and the youngest one was called “the biggest victim of them all.” — Read the FULL article here.

In the midst of this judicial mugging, every time Lacy’s lawyer tried to speak up, he was silenced. The little victim, Jayla, was never even mentioned once by Kroeger or the judge – or by the police or anyone else. Only Lacy mentioned her, when she made her statement. Lacy detailed how the poor girl is still suffering the effects of this attack: She is wetting the bed and having bad dreams, and more.

Yet when Lacy completed her statement, Kroeger lashed out not at the perpetrators or their parents, but at Lacy. She viciously tongue-lashed Lacy for a full 15 minutes, until finally Judge Borreson had to stop her.

Even fake-fact checker “Snopes” was part of saying it ‘wasn’t rape’. 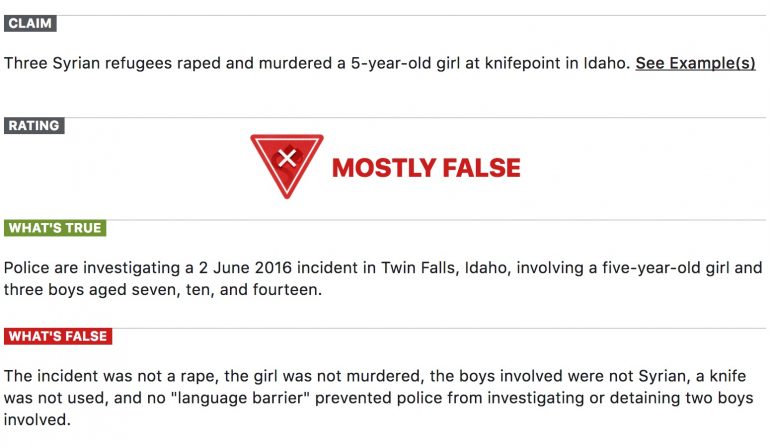 There were problems with this case from the beginning:

Reports claimed that the police took 2 1/2 hours to arrive on scene, but the police chief said they ‘arrived in a timely manner’.

The justice system hung this little girl out to dry. We’re predicting there will be no #JusticeFor hashtag campaigns for her.

If you are interested in helping the girl’s family with their legal costs, there’s a Gofundme page for that.

How many crimes against defenseless victims have to pile up before we recognize that there’s something about ONE group that’s different from any other ‘religious’ group?

If someone you know is still making excuses for Islam you should have them listen to this: