Awww. Does the big powerful former head of the FBI need a blankie, too?

He had a good gig going on. For a long time. And he wasn’t happy about giving it up.

He had a goal. It was to make Trump pay for firing him. Simple revenge.

How did he make him pay? By orchestrating an investigation.

How do we know? He straight up told us… the guy in charge of tracking down leaks released one of his own. 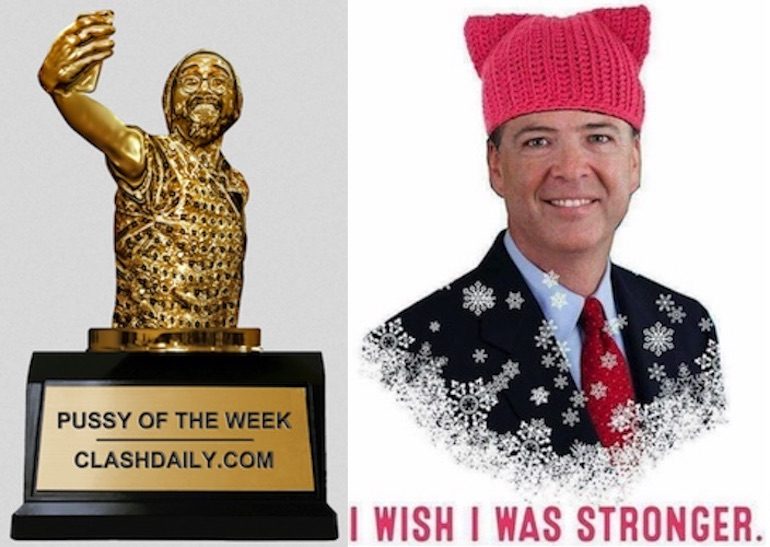 Why? He told us that, too. He released it for the explicit purpose of giving the out-of-power Democrats that one weapon they really craved. As the headlines said:

But what story is the LIBERAL media telling?

That poor, baby! Did the bad man hurt you? Do you need a hug?

It wasn’t all that long ago that the same media wanted to nail Comey’s scalp to the wall.

He figured prominently in Hillary’s “Blame America for not voting for me” tour.

But poor, fragile Comey has found a magical way to be exonerated by the press, and to even become the flavor of the week.

Paint Trump in a bad light.

And he did it in the classic Liberal way… he pretended to be a victim… while ruthlessly attacking his ‘rival’.

No wonder they forgave him. He knows the media rules. And played by them.

Conrats, Jimmy. That earns you our prestigious P—Y Of The Week award!

Go grab yourself a copy of this book to find out exactly what that means:

(And if you know someone who’s more ‘dud’ than ‘dude’ put it in his hands before he becomes another Comey. America doesn’t need any more like him.