For all of Obama’s supposed love of the ‘International Community’ did Obama explicitly violate International Law in his last weeks in Office?

Assange claims he has.

And that Obama has set a dangerous precedent in the process.

Remember when Obama slapped sanctions on Russia and expelled their ambassadors?

That was fine. But seizing their property, he claims, was a violation of a treaty that protects Diplomats from ALL countries.

Here is the string of tweets where he made his case against Obama. 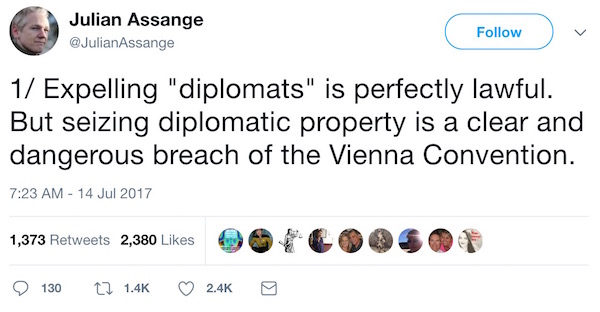 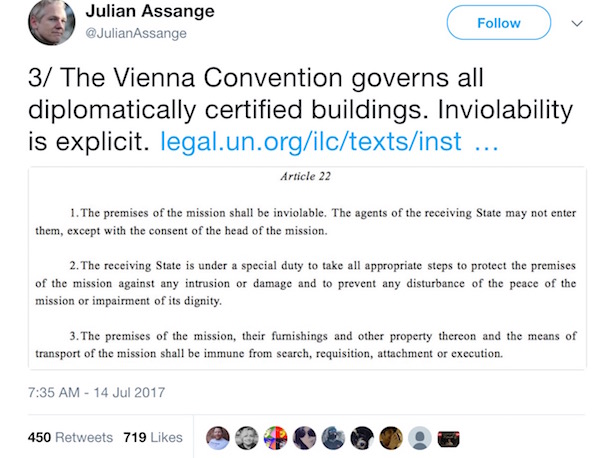 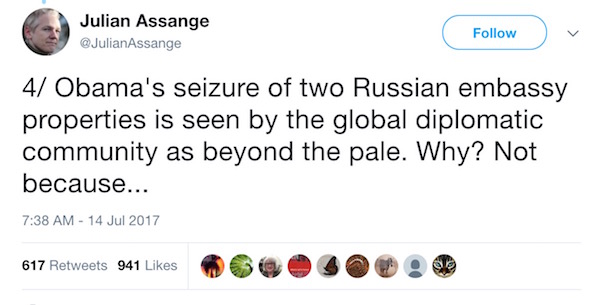 There it is in his own words.

If you are using an ad-blocker, and can’t see the images, here is the text:

Expelling “diplomats” is perfectly lawful. But seizing diplomatic property is a clear and dangerous breach of Vienna Convention.

I know all about this as I had to study whether the UK could legally seize Ecuador’s embassy. No — even if every diplomat is expelled.

Obama’s seizure of two Russian embassy properties is seen by the global diplomatic community as beyond the pale. Why? Not because…

of any great love of Russia. But because it places all embassies everywhere at risk by setting a new norm.

That is why even countries that opposed the US supported its rights in relation to the 1979 occupation of its embassy in Tehran.

Obama’s action in seizing the two Russian embassy properties is much worse than the seizure of the US embassy in Iran. Why? Because…

Iran had just had a revolution and was in chaos. Protestors and not the Iranian government occupied the embassy (at least formally).

By contrast the US seizure of Russia’s property was proclaimed to be an act of state, a flagrant and destabilizing breach of Vienna.

The Vienna Convention on Diplomatic Relations is not just some obscure international law. It is the foundation of all diplomatic law.

It is the most widely obeyed and respected international law there is. It governs every diplomat, embassy and consulate.

So Obama’s flagrant breach of it strikes at the heart the entire diplomatic system. Normally it is only seen when armed mobs take over..

and a militia occupies an embassy. As both the US and Russia are signatories to the Optional Protocol on Disputes any time Russia…

wants to it can take the case to the International Court of Justice and win within months. (link)

If the US doesn’t obey the ICJ ruling on it will alienate the global diplomatic community and the ICJ. It will then be open season…

standing at the ICJ will have diminished increasing the chance of victory for the plaintiff.

THE ABOVE is likely why we are seeing talk about the US giving the Russian properties back. The Trump admin doesn’t want to look…

weak or frightened or as if it can be pushed around by the ICJ or the global diplomatic community, so it pretends that its a quid…

You’d think this is exactly the story they would love! Wrongdoing by a President (that topic seems to be an obsession in the Media(D) right now) and there’s a Russia angle!

What could this story POSSIBLY be lacking? (Except maybe a way they can weaponize it agianst the Right.)

Is Assange making a mountain out of a Molehill, or is he making a strong case? Has Obama set a precedent that jeopardizes ALL of our diplomats and embassies?