That’s pretty rich for a ‘leader’ who sold out his own country.

And he’s brought his moral superiority with him. (That’s no surprise, he brings it everywhere.)

He disapproves of the ‘America First’ approach.

But before we look at what he’s encouraging America to do, let’s have a look at just WHO is lecturing you.

there is no core identity, no mainstream in Canada

And that’s what he wants for YOU as well.

But somehow, that doesn’t stop him from TELLING Canadians what Canadian values ‘really are’.

Here’s one of his favorites: 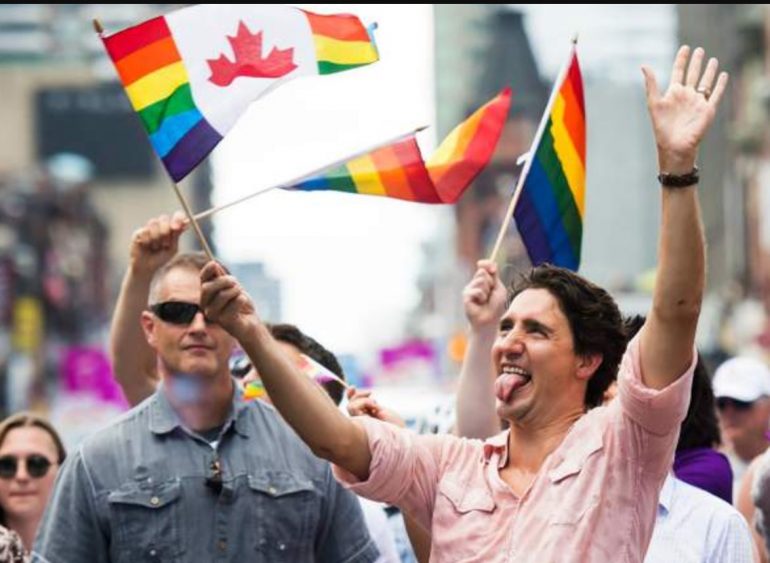 How great a friend and ally is he? Remember the army medic that was killed with a grenade? His killer (15 at the time, son of OBL’s money guy) was a Canadian citizen who went over to fight on the other side. He got nabbed and held in Gitmo.

Canada took him back.

Trudeau just gave Omar Khadr $10.5 million Canadian (about $8M US) in ‘damages’ for the time he spent in Gitmo. The widow and children successfully sued Omar Khadr in an American court for damages.

But this million-dollar payout was fast-tracked to DELIBERATELY get ahead of due process of his victims. The cheque was cut, cashed, and presumably moved offshore within days. The courts are involved, but it’s possible that the money is beyond his reach.

This isn’t a one-off, either. Even leftist Huffpo reported: “Bill C-24: Trudeau Says Terrorists Shouldn’t Be Stripped Of Citizenship”

Now that you can see what an anti-patriot Trudeau is with his OWN country, what is he telling US?

Prime Minister Justin Trudeau has told governors from across the US to ditch the “America First” motto.
His National Governors’ Association speech in Rhode Island on Friday was a first for a Canadian prime minister.
In his speech, Mr Trudeau urged US governors to embrace their neighbour to the north and avoid protectionism.
It is all a part of his aggressive strategy to promote a “thinner border” ahead of vital trade talks with the US renegotiating the Nafta treaty.
President Donald Trump has made “America First” his mantra, shaping his policies on trade and immigration.

Of course, there is room for the debate whether protectionism is good or bad for the country; about whether Maximally free trade or limited trade is more in line with Conservative values.

But Trudeau is the same Jackass that said ‘The budget will balance itself.’

How dare he come to American Soil and tell us how to run our economy.

America is where Canadian citizens run to for medical treatment when their ‘free health care’ fails them.

Go home, little man, and get your own house in order.

And do yourself a favor … or, if you prefer ‘favour’ … read this before the next time you try to weigh in on American politics.