This is what happens when you outlaw free speech.

Two of their darlings are fighting, whatever shall the Left do on this one?

Normally, in their script, being Muslim makes you an automatic ‘good guy’ in whatever narrative you’re telling. Same story with LGBT.

They haven’t seen a dilemma like this since a Muslim barber refused to give a haircut to a Lesbian on religious grounds.

So which side is filing a complaint? 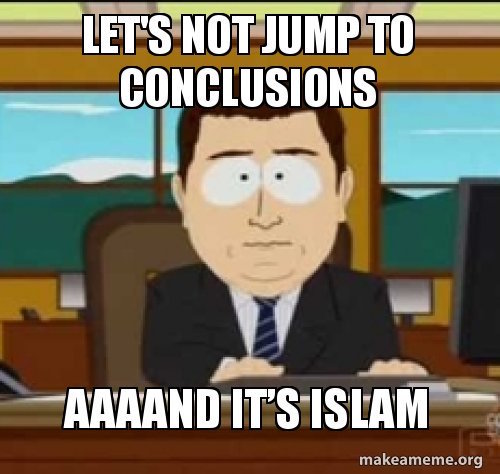 Muslim leaders have lodged a formal complaint with the organisers of London’s Pride festival after placards allegedly bearing Islamophobic messages were spotted at the event.

A secularist group of former Muslims were seen carrying a series of controversial signs during the march through the capital last weekend.

Banners bearing slogans such as “Allah is gay”, “F*** Islamic homophobia” and “East London Mosque incites murder of LGBTs” were carried at the event by members of the Council of Ex-Muslims of Britain (CEMB), who were a participating group listed on Pride’s website. — Read More

Ready to join @LondonLGBTPride
For LGBT rights in countries under Islamic rule pic.twitter.com/H8vVd5tPzI

But now they’ve spoken out against Islam. That’s different.

Had great Pride today. Some back & forth with police about 'Allah is Gay' being 'offensive' but mainly lots of love https://t.co/RnD7pqnIZT pic.twitter.com/ltF5f2Adn6

They have dared to lift the veil (so to speak) about how Islam REALLY treats gays, women and apostates.

Dumping the Christian faith does not give you a prison or death sentence. (Whereas, in Obama’s beloved Indonesia, they just locked away a duly-elected Christian Governor for ‘blaspheming’ against Islam by claiming that it was OK for Muslims to vote for a Christian.)

Now we get to find out who is ‘top dog’ in the Left’s hierarchy of victims.

About 20 CEMB activists marched on Saturday with placards bearing a range of messages from “We’re here, we’re kaffir, get used to it” to “Allah is gay”. Several wore body paint across their chests depicting eyes crying rainbow-coloured tears.

[Kaffir is the us-and-them term Islam uses to denote outsiders.]

It looks like LGBT has seen the writing on the wall, and is already willing to bend over and take it. (So to speak.)

“While our parade has always been a home to protest, which often means conflicting points of view, Pride must always be a movement of acceptance, diversity and unity. We will not tolerate Islamophobia.”

Pride has also written to East London Mosque to say it has referred the complaint to its community advisory board, which assesses every parade entry after each year’s march, and “decide on whether CEMB will be allowed to march again in the years ahead.”

So that must mean it’s more important to ‘affirm’ Islam than to talk about the Islamic nations in which homosexuality (and a lot of other things, including converting to Christianity or Atheism) can get you killed. Today.

Maybe they’ll listen to what a Muslim who lived under Islam has to say about it. (Or will he be denounced as ‘Islamophobic’, too? “As a Muslim, I am Shocked by Liberals and Leftists”

If they ever decide they don’t actually WANT to pay the Jizya (look it up), they should really read this book, and grow a pair.