The Left has turned on the Media (D)! Grab your popcorn for this one, it’s a hoot!

Oh, and she’s also a wanted terrorist that escaped from prison for executing New Jersey State Trooper, Werner Foerster in 1973.

But if you focus on the little fact that she murdered a police officer, the string of robberies that she was accused of, her name on the FBI’s Most Wanted list, the fact that she’s a fugitive who sought ‘political asylum’ in Cuba, was a member of the Black Liberation Army — a black supremacist terrorist group, and a blatant anti-Semite, then you are part of the Alt-Right. So says Linda Sarsour.

Sarsour has used her minority female privilege to tell Jake Tapper that he now identifies as a member of the ‘Alt-Right’ for calling out the Women’s March on Twitter.

Shakur is a cop-killer fugitive in Cuba. This, ugly sentiments from @lsarsour & @dykemarchchi …Any progressives out there condemning this? https://t.co/rXnHLgE2hR

And here is Sarsour replying to Jake (I’ve included photos of the tweets as Sarsour has deleted embarrassing tweets in the past.) 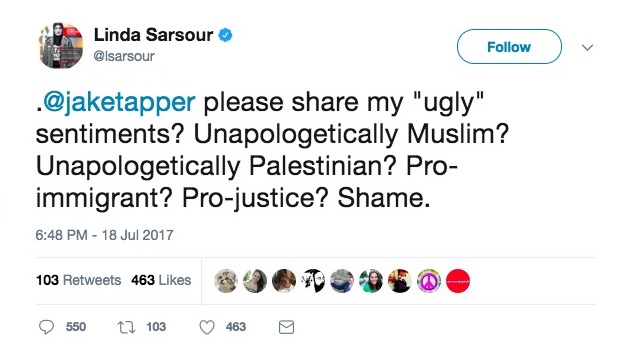 Part of the Alt-Right?

There is no evidence that he’s joined the Alt-Right.

There’s barely evidence that Jake Tapper has an opinion that hasn’t been given to him by the higher-ups at CNN.

Isn’t that weird that she’s slandering him like that?

What happened to we can disagree as long as you don’t ‘oppress’, ‘deny humanity’ and/or the ‘right to exist’?

Perhaps Sarsour forgot that she pinned this Tweet to her homepage? 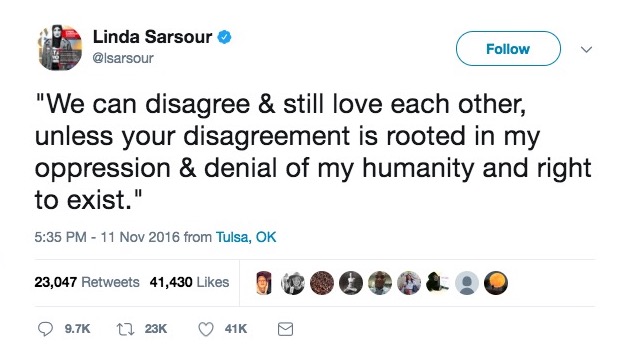 Where is the ‘oppression’?

The ‘denial of humanity’?

The ‘denial of the right to exist’?

‘Cause, honey, I ain’t feelin’ the love in those tweets to Jake.

No worries, Jake Tapper shockingly didn’t back down.

He actually gave an example.

How unlike a member of the Media (D)!

I thought that giving evidence was out of fashion in the Trump era.

The reference is to a tweet that Linda Sarsour made about Ayaan Hirsi Ali and Brigitte Gabriel. She had said that they don’t deserve to be women — presumably due to their opposition to Sharia Law — and she wished she could ‘take their vaginas away’.

Hirsi Ali is an outspoken critic of Islam and is a former Muslim that had Female Genital Mutilation performed on her as a child. There is also a fatwah issued on Hirsi Ali that was stabbed into the body of Dutch filmmaker, Theo Van Gogh, with whom she made a short movie criticizing the treatment of women in Islam.

Tapper didn’t stop there, though.

He’s semi-trolling her by tweeting out the truth about Assata Shakur.

You can read more here about the role of Shakur in the murder of N.J. State Trooper Werner Foerster, 34 https://t.co/mpyl3walk3

#AssataShakur was convicted of first degree murder, escaped from prison and fled to Cuba. More on her story here-> https://t.co/7ktRJ1sQ46

And that’s not all.

He is reporting on the arrest of a woman in (Sarsour’s beloved) Saudi Arabia that was ‘violating’ the state dress code in a viral video on social media. The woman indecently wore what is being labeled a mini-skirt.

By the way, a leader of Black Lives Matter wasn’t going to let her homegirl, Linda Sarsour, take on Tapper alone.

After all, BLM had a freaking Dance Party to celebrate Shakur’s birthday!

She jumped into the fray.

These tweets about supporting a "cop killer" are intentionally inflammatory

How about being part of a gang that kills a NJ State Trooper? Is that considered inflammatory?

How weird is that?

Jake Tapper is seeing the defense of a terrorist and cop-killer by the nutty leftists and is taking umbrage to it.

"To see what is in front of one’s nose needs a constant struggle."

Linda Sarsour says he’s joined the Alt-Right because he disagrees with her and thinks it’s sick that the Women’s March is celebrating a fugitive cop-killer — even if she is a minority woman.

I wonder how Jake’s handling it.

It sucks to be called things that you aren’t.

Like all of us on the Right that have consistently been called racists, misogynist, Islamophobic, xenophobic ‘deplorables’.

Members of the Alt-Right.

Welcome to the club, Jake.

Now you know how it feels.

One more message for Jake Tapper:

Or, you could carry on as usual.

In that case, here’s a lovely parting gift for you.