Well, they wouldn’t want to ‘offend’ potential voters, would they?

Government policy made clear — as part of the Citizenship Process — that some behavior that is common elsewhere CANNOT happen here. But the new PC Princeling has a very different vision:

This is our friendly neighbor to the North. This is the PC goal — Trudeau is the exact opposite of #MAGA. He is a globalist who has declared Canada is the world’s first ‘Post-National State’. Dangerous words, dangerous ideas we do NOT want our OWN leftists to copy and borrow. But of course, they’re already trending in that direction.

‘‘There is no core identity, no mainstream in Canada,’’ Trudeau claimed after the October election. ‘‘There are shared values — openness, respect, compassion, willingness to work hard, to be there for each other, to search for equality and justice.” —Vancouver Sun

If you don’t have a CORE culture, you have no basis for saying ‘you can’t do that here’. (Kissing the ass of a ‘global community’ is always a bad idea. Here’s why.)

Like Honor killings. Or FGM. Becuase that would be ‘Anti-Muslim’. (If you can’t be Muslim without honor killings or FGM, maybe you shouldn’t be moving to a Western nation.)

The documentation makes sure to play up the sins of Canada’s past (echoes of the Left’s Blame America First crowd) while leaving out the things that made it a destination worth coming to in the first place.

His government also dropped language in the Citizenship process about the expectation of newcomers to find work. (Gee, wonder why?)

This is the same Prime Minister that fast-tracked $10.5M to former Gitmo Detainee Omar Khadr (he killed US Army Medic Speer, and his dad was Osama Bin Laden’s money guy), but has not reached out to Speer’s widow, and wants people to stop asking him that question. (Conservative former PM Stephen Harper, by contrast, HAS reached out to Speer’s family).

Trudeau has also said explicitly — and amended law to reflect this — that a person should NOT have their Canadian Citizenship stripped merely because they have joined in a fight for a foreign military or militia (like ISIS).

(The Conservatives before him had written a law that stripped the citizenship of terrorists.)

Besides that, he’s basically an all-around d-bag. But then, his warm praise of Castro when he died should have been a tip-off. 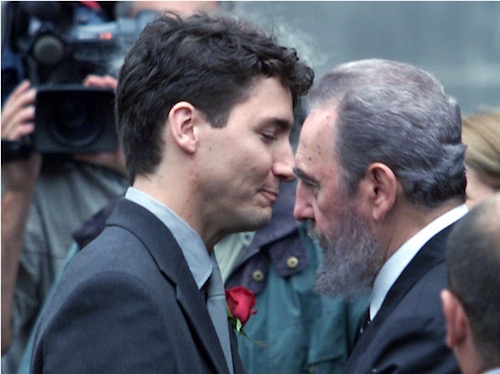 Here’s a video that will make you hate Justin Trudeau (almost) as much as the Conservative Canadians we know hate him:

But let’s be honest. That’s a book with lots of words.