This bro is a real piece of work. This sign is just so offensive but he’s not backing down.

As a matter of fact, he’s doubling down on his anti-cop drivel on social media.

EAV Barbell Club in Atlanta, Georgia is making the news in a very bad way.

In handwritten, unfriendly letters, a sign on the club door reads:

‘RULES: DO WHATEVER THE HELL YOU WANT, CORRECTLY, EXCEPT CROSSFIT CULTISM – NO FUCKING COPS’.

Here is an image: 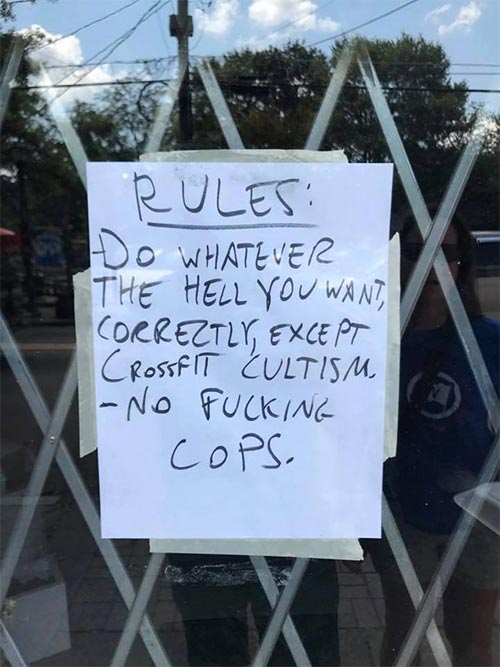 Bro has a point about the ‘crossfit cultism’ — seriously, what’s up with that?

Jim Chambers, owner of the club and an ‘activist’ is not only unapologetic, he’s actually working hard to make it even worse than that.

The sign was posted to social media and was questioned:

In the comments to that post, a man named Drew Keegan asked “What exactly does this sign mean hanging on your door? Specifically, the last part.”

In response, EAV Barbell CLUB said “It means that police are not welcome in our establishment.”

He did take the sign down briefly because of the profanity, but the sentiment stands.

Chambers said he took the posted policy down because, “I didn’t want the other folks there to take the heat that I’m willing to take.” The lifelong ‘political activist’ said that the sign is a ‘political statement’ to protect the groups who regularly work out there, including “minorities who are uncomfortable with the presence of law enforcement agents.”

Chambers also added that military veterans are not allowed either. His gym is often a gathering spot in the community, and a place where activists meet.

The EAV Barbell Club’s Facebook page is filled with anti-American and anti-police posts. 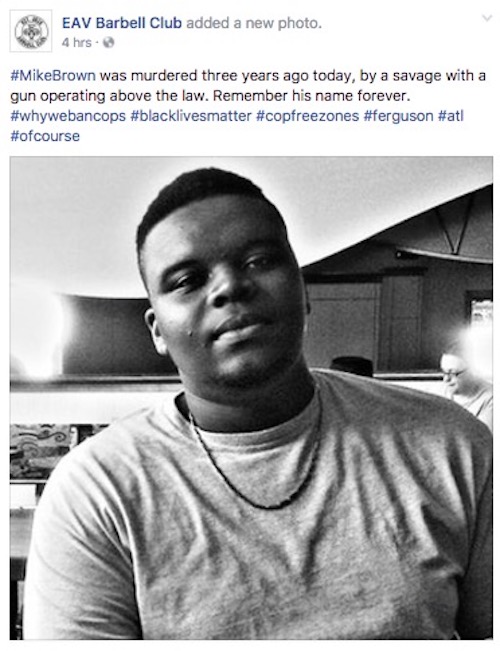 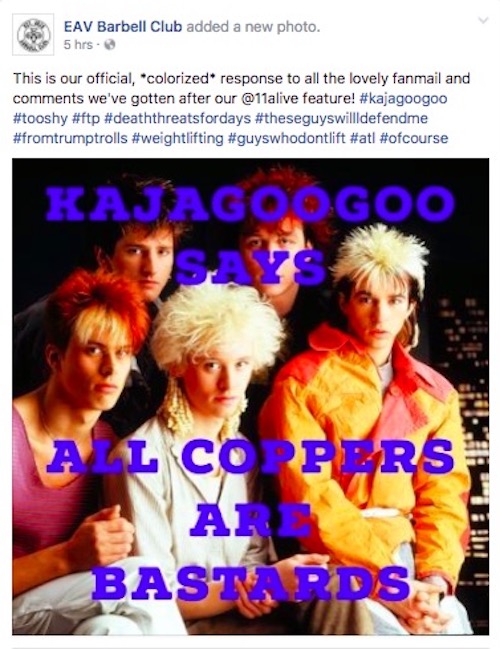 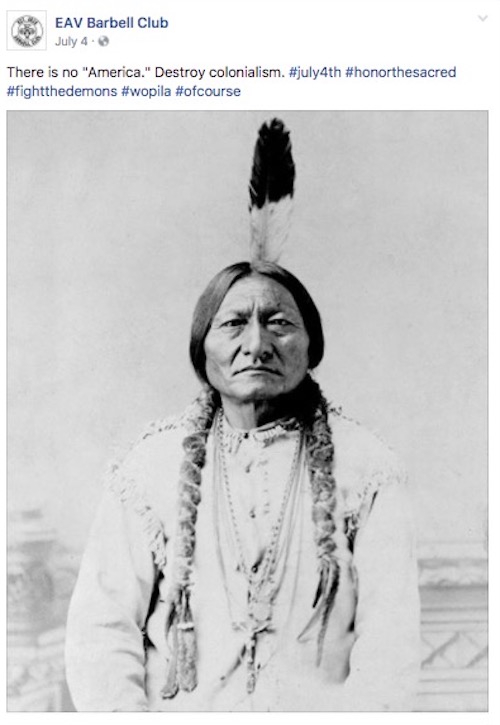 No America? Fight the demons?

This dude is a real peach!

Chambers said that if a cop has a warrant he or she could go anywhere they want. Maybe take your cop friends to work out:

He says it’s not against the law for him to discriminate.

But, then, why are there different rules for gyms and bakeries?

They can both choose their clientele, right?

Isn’t that the exact same argument?

Maybe we could ask the harpies on The View what Jesus would do if he ran a gym.

Of course, I don’t exactly trust their theology.

And I’m pretty sure half of them haven’t seen the inside of a gym other than maybe Curves.

As Chambers continues to be adamant that he’s not letting in law enforcement, and doubles down on his anti-cop rhetoric on Facebook, the cops are taking the high road.

The Atlanta Police Department took the high road, and would not comment except to say, “Were we to respond to an emergency there, this sign would not stop us from lawfully doing our job.”

In response, Chambers said that they never have, nor will they ever need a police officer. He also said that he plans on putting his sign back up, without the language.
Source: Blue Lives Matter

Well, let’s hope that Chambers is right about that.

Because he’s not endearing himself to the law enforcement community or the men and women in the military that fight for the freedoms he has to be the a-hole that he is.