Is it any wonder the Church gets hammered for being ‘hypocritical’?

There is a reason that Church and State are separate entities.

Each is supposed to serve as a counterweight to the other.

If for example, some TV preacher gets called out for misuse of charity funds to live large, that should be an issue for the state to investigate. Or if a sketchy activist Reverand uses charity funds to buy the silence of a bastard child.

On the other side, if the State is over-reaching, and acting immorally — like when the Democrats enacted Jim Crowe — it can, and should be the Church who is independent enough to show moral leadership and courage to call them out.

We saw that where Christians lead the charge in the ending of the slave trade.

We saw it with Jim Crowe.

Even though Obama’s argument about Jim Crow holds true, it’s also true that Christianity (and other religions, though less so due to demographics) was used as an argument against Jim Crow too. And, as time progressed, that side began to prevail.
In fact, a mere two years after the publication of Bilbo’s book, the Federal Council of Churches officially denounced segregation, stating that Jim Crow was “a violation of the gospel of love and human brotherhood.” Though many Southern churches did not desegregate after that declaration, Christian conferences and councils over the next decades made equality their focus. In 1957, for example, the General Assembly of the Presbyterian Church told its ministers that “it is unthinkable that a Christian should join himself to Klan or Council whose purpose is to gain its point by intimidation, reprisal and violence, or that he should lift no voice of protest against those who appeal to prejudice and spread fear.”
As the Civil Rights movement continued, Christianity — especially via dedicated organizations like the Southern Christian Leadership Conference — was one of the driving factors in protest against discrimination. It’s no coincide that Martin Luther King, Jr., was a minister. —Time

Which brings us to the crux of the issue.

Parody signs like these aren’t far from what some ‘leaders’ are actually saying ‘in real life’. 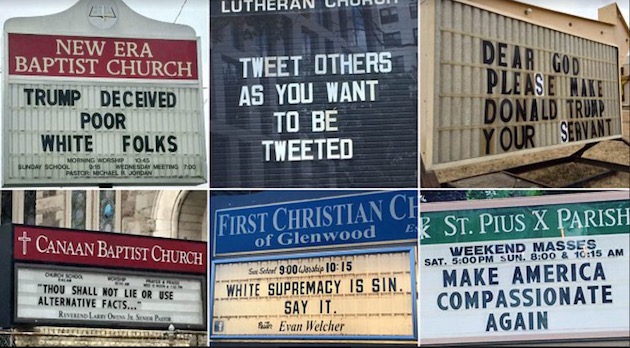 There is zero — ZERO — moral courage required in parroting exactly the same words that culture holds as ‘true’. When Jesus talked about losing your ‘saltiness’ and becoming worthless, that’s exactly what he was talking about.

Moral courage is standing up like John the Baptist (or MLK) and denouncing the sin of the culture when it will cost you something. Not by joining in the marches of groups who openly oppose the gospel, who promote greater racial divisions (whether from the right or the left) or contradicting the moral teachings of God in an attempt to become more inclusive.

Would you have seen the Apostle Paul calling for greater dialogue with the worshippers in the Temple of Athena? Or being more understanding of Emporer worship?

It’s easy to join the drumbeat of voices denouncing Trump — when that’s all everyone else is doing. But what about when the denunciations themselves are based on lies?

Every Republican in my lifetime has been denounced as a racist. Why do Church leaders take their word for it when Trump is called one? Because if you’re WRONG, you yourselves are committing false witness against your neighbor. (That’s one of the 10 Big Ones!)

You are also undermining the legitimate authority of our leaders for whom you were called to pray. Are we really to believe that they are speaking this way about Trump AND they are truly praying for him?

If Paul could pray for Nero, who fed Christians to lions, and burned them alive to light his garden… what’s their excuse?

And again where was their moral Courage, or outrage when Obama compelled Nuns to pay for birth control? Or when he tried to eject the Romeike family (who fled German persecution) AFTER they were lawfully GRANTED asylum by the courts?

Point to the time these same ‘religious leaders’ denounced the President who slandered Christianity at a Prayer Breakfast, but stood before the world to say that ‘the future does not belong to those who slander the prophet of Islam’.

What about his friendship with an unrepentant terrorist? Or his inflaming of race relations?

Where is your outrage at Farrakhan openly calling for murder of white people?

Labelling Trump a white supremacist is to willfully ignore the facts. Actual white Supremacists do not like Jewish people. (Remember Hitler?) And yet one of the very first foreign leaders he met with was Bibi.

If these Churches want to be truly morally courageous, you will not merely echo the voices you hear on TV… any pagan can do that.

If they are truly courageous, they will call out those voices on TV when THEY are lying, or leaving out.

They will call out specific cultural sins that are celebrated and cause harm to society. (Like the epidemic of fatherlessness and the factors that lead to it.)

They will stop re-adjusting their own morality to conform to the latest Radical Political agenda.

Should you call out any politician, even Trump, when he gets it wrong? Sure. Knock yourself out.

But if you are doing it to virtue signal and be culturally acceptable?

Then you are just another Pharisee, trading God’s truth for the praise of men.