Hell, WE have even ran some their clips.

They also support Trump and have a big following. And as you’ve seen from Google, lately, such deviations from approved political thinking will NOT be tolerated or encouraged.

.@YouTube @TeamYouTube stopped over 95% percent of our videos from being monetized, stating: "It's Not Suitable For All Advertisers"…….. pic.twitter.com/qDpaL8A4ec

Google is using their virtual monopoly of the internet to financially punish dissent into silence.

You will remember how the CEO of Google was involved in Hillary’s super-successful Presidential campaign, right? She must have done well, what with all that internet collision she had going on her side.

Certain search engine irregularities did not go unnoticed during the campaign, either.

After Google fired someone for the supposedly ‘sexist’ memo last week, they had already tipped their hand. They are using their wealth, clout, and virtual monopoly of the internet to wage a culture war against the right.

Dissent will be silenced, one way or another.

Diamond and Silk, for example, have had 95% of their videos demonetized.

They are by no means alone.

Another YouTube Favorite, Paul Joseph Watson, is dealing with the same issue.

Imagine if they kept Philadelphia from having access to ink in the 1700s. Would that have had historical consequences? You bet it would, and they’re counting on it. 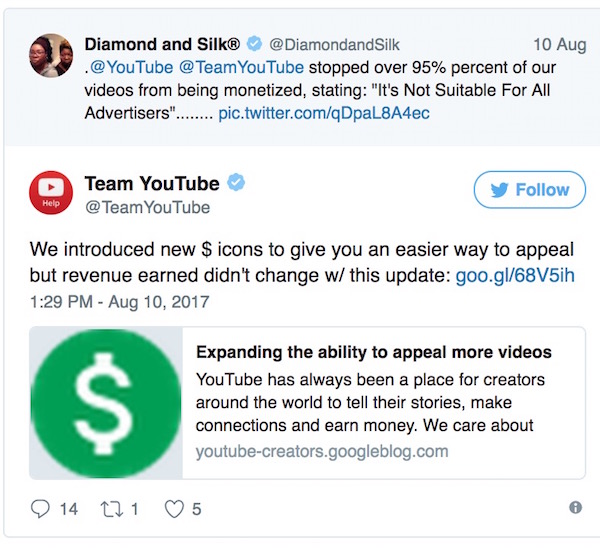 Just like we are to ‘trust’ the political neutrality of this hot mess:

YouTube’s Trusted Flagger program — aka people in the YouTube community who have a high accuracy rate for flagging problem content. Google says it will add 50 “expert NGOs”, in areas such as hate speech, self-harm and terrorism, to the existing list of 63 organizations that are already involved with flagging content, and will be offering “operational grants” to support them. — TechCrunch

Looks like they’ve got a DIFFERENT ‘appeals process’ in mind:

If these YouTubers hit them with a class action lawsuit, let’s hope it’s big enough to send the message to shareholders that they are not in business to help the Left create its own version of Ray Bradbury’s Fahrenheit 451 dystopia.

Share if you think there’s suddenly a viable Social Media niche for someone defending Free speech.