What is it about the Obama administration that has all the slick political instincts of Neville Chamberlin?

Remember him? He’s the guy who got a handshake, and a promise from Hitler that would give ‘Peace In Our Time’. 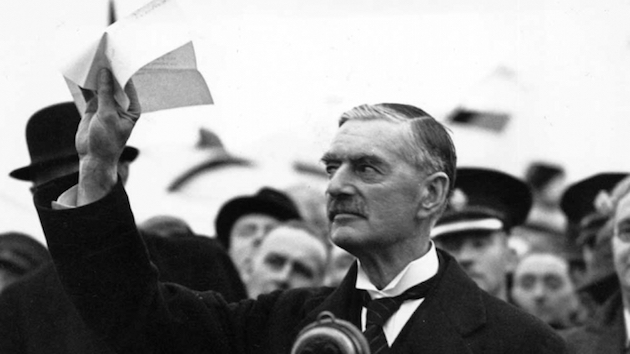 That worked out well, didn’t it?

Well over Six Million dead, and that’s just the civilians he killed in labor camps. The actual battlefield costs were far greater.

So why is the Left suddenly siding with Kim Jong Un?

When Obama was in office — April 2016, in fact — it was ‘perfectly acceptable’ for him to threaten force against Little Kim, even for someone accustomed to ‘leading from behind’, like #44 was.

President Trump should ratchet down his rhetoric and learn to live with a nuclear North Korea, according to Susan Rice, national security adviser under President Obama.

In an op-ed for the New York Times, Rice said it’s too dangerous for Trump to risk military engagement with North Korea with his “bluster,” which could put millions of people in Seoul at risk. While she said the Trump administration should not “legitimize” North Korea as a nuclear state, it should start tolerating the new reality.

“History shows that we can, if we must, tolerate nuclear weapons in North Korea — the same way we tolerated the far greater threat of thousands of Soviet nuclear weapons during the Cold War,” she wrote. “It will require being pragmatic.” — NYTimes

Don’t forget, this is the same Susan Rice who knowingly lied to us all about the ‘movie’ that ’caused the deaths’ of some Americans in Benghazi. She already knew it was a lie, and she looked straight into the camera and shoveled it to America anyway.

Didn’t her old boss cheer the Arab Spring that led to the destabilization of the entire region, and trigger mass migrations into Europe, with all the attendant problems there?

Didn’t her boss scrap the missile defense shield to satisfy Russia — shortly before they took Crimea?

Haven’t you been following the exact same strategy with Iran that Clinton promised would keep North Korea from getting nukes in the first place?

And you dare to lecture us about how to handle the mess you kicked down the road?

The much-vaunted ‘international community’ voted 15-0 to ramp up sanctions on this unstable despot. To increase pressure. And ideally, to strip them of their nukes.

You want us to just ‘tolerate’ the nukes? And stop with the bluster?

Where was that ‘sage’ advice when your old boss had this to say:

“We could, obviously, destroy North Korea with our arsenals,” he told CBS News. “But aside from the humanitarian costs of that, they are right next door to our vital ally, [South] Korea.” —Telegraph

The next thing he said in that article, for the record, was to describe North Korea as ‘relatively low level threats that they’re posing right now’.