Hey, genius! Could THIS be why we’re all calling you ‘fake news’?

You have a story you WANT to tell, so you massage your reporting of events until you can frame it that way.

And you’ve been caught doing it so many times that people would sooner trust the food at Chipotle than the crap you’re dishing out. 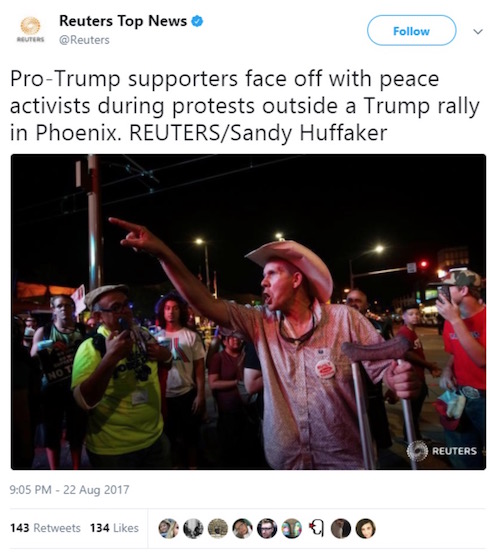 Which is entirely consistent with what CNN also did:

CNN published an article Friday titled, “Unmasking the leftist Antifa movement: Activists seek peace through violence,” but the next day changed the headline to exclude any mention of the group using violence.

Reporters Sara Ganim and Chris Welch took an in-depth look at antifa, which refers to an anti-fascist, leftist movement that sometimes uses violence in protests to further its goals. Members of antifa earlier this month protested a gathering of white supremacists in Charlottesville, Va., where a white supremacist is charged with killing one and injuring others with his vehicle. During the recent antifa protests, at least two reporters were physically assaulted by antifa members; one antifa group blamed the reporter for filming them without their permission.

CNN scrubbed the headline of its article and changed it to “Unmasking the leftist Antifa movement.” Benny Johnson from the Independent Journal Review took a screenshot of the two different headlines and claimed CNN altered the original title because antifa did not like it. —FreeBeacon

If these leftist ‘counter-protesters’ are such ‘peace activists’ how come they’re sucker-punching people on their own side? #PunchANazi

And before you think it was an ‘isolated incident’…

There is a mean streak in these people. They’re not there to be ‘heard’. They have come with demands, and they are there to intimidate.

This is the same group to whom the police gave this polite message:

This from the same people who tell us that Planned Parenthood are ‘really’ about ‘women’s health’, and to call them out as hearless abortion mills is unfair. (Pay no attention to what their own employees have said about it: ‘I felt like I was selling abortions sometimes, more than I was treating people’.)

Several people on social media slammed Reuters for this gaffe.

No one did it in as visually stunning a way as this user: