Did you know that Procter and Gamble have expanded into the race-baiting business? It seems they have with this ad.

They are promoting the video with the hashtag #TalkAboutBias on social media.

This ad has had visceral reactions from a variety of people.

Many on the Left are thrilled because black people are ‘woke’ and see the world like it really is — a fight between the oppressor and the oppressed. It’s a zero sum game between races. Those evil ‘un-woke’ right-leaning people are so backward that they want to everyone to work hard and have rewards on ‘merit’ rather than reparations for oppression. The bastards.

My favorite definition (and the most accurate that I have found) is on Urban Dictionary: 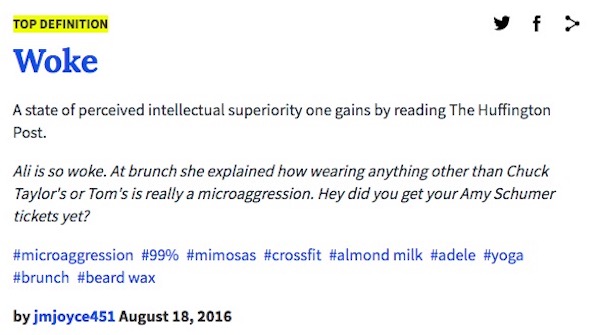 So, Procter & Gamble have decided that they are now ‘woke’.

The YouTube page that they posted this ad on is called ‘My Black Is Beautiful’, and it’s a channel that has products and tips for black customers. Things like haircare and skincare products, as well as styling tips and makeup tricks. It’s pretty neat, actually.

But then they added this.

The ad has a number of black mothers having ‘The Talk’ with their child throughout the years. It’s specifically mothers, and only a couple of the scenes even show a father. When they do bother to show a dad, he’s silent. ‘The Talk’ is all about the institutional racism that is pervasive throughout our society.

Where do I begin?

I thought The Messiah Obama was supposed to bring in a ‘post-racial’ era?

Ok, cards on the table — this ClashDaily Editor is a non-white woman, and I’ve been subjected to a version of ‘The Talk’ by my father. It was similar to the mom with the umbrella talking about working twice as hard and being twice as smart. (Of course, I got that because I was slacking off in school because the ‘cool’ kids thought I was too smart to hang out with.) I eye-rolled through it and told him that I was more concerned with Affirmative Action getting me a job that I didn’t deserve because of my race. But then, at the time, my dad was a Liberal, so he didn’t get it. (Don’t worry, he got on the right track later.)

I now have a similar version of ‘The Talk’ with my sons — especially the one that looks like he’s white — about the vitriol and hatred that will be flung their way. I tell them about the college graduation rates that are 80 percent female. I help them deal with an education system that is heavily tilted towards girl-friendly learning that is ‘rigged’ against boys. I tell them to work hard, study harder, and that they’re going to have to not listen when people talk of their ‘white male privilege’. One has already faced it in high school with the prevalence of the Social Justice in the curriculum.

Quite the reversal, don’t you think?

If you’ve got some time, check out this conservative black man’s take on it, it’s really worthwhile. He says that the ad is unrealistic in many ways. I agree.

I also have a real problem with the suggestion that the people that are charged with serving and protecting our communities are being labeled as racist killers. The attack on law enforcement officers is really, really disgusting.

Perhaps we could have a discussion about crime rates, gangs, and single-parent families that contribute to this mess. An intact family is the best indicator for success for a child — whatever the race. And when even Don Lemon — the idiot darling of CNN — says that 72 percent of black children are born out of wedlock, we have a crisis.

The ad is supposed to #TalkAboutBias but is painfully oblivious to the inherent bias that it is spouting.

It looks like they’ve really got people talking about bias, though.

#BOYCOTT How Despicable & Shameful of You to USE #RACISM to SELL PRODUCTS! To Make #White People EVIL & #Black People Innocent Victims

Corporations that market to insecurities while relying on cheap labor in China when they could be bringing good paying jobs to Americans.

Boycotting all products due to race baiting. Sick sick sick. We are not your props for propaganda.

Yeah real issues brought to you by people who sell soap.

So, why are they doing it?

Simple: To sell stuff to the ‘woke’ crowd.

Let’s face it, the Media (D) continues to focus on the Social Justice and #Resist crowd, right?

Look at the nightly news and see the negative press that our President gets and the constant discussion about racism in America.

At no time does the Media (D) acknowledge that some people that voted for Obama flipped and voted for Trump. That’s just a basic mathematical fact, but it is never mentioned. Are those people suddenly racist? Unlikely. They voted for a black president. Twice.

The Media (D) also fails to recognize the many, many successful black musicians, athletes, actors, and other celebrities — like Oprah Winfrey with her estimated $3.1 Billion Net Worth. Are they only making their money from the black community? That seems unlikely.

Is there really still systemic racism in the US?

Or has the pendulum swung too far to the social justice left?

White people are now being told to shut up and let the minorities speak.

How is that ok?

If some social justice warrior told one of my sons that he needs to shut up because he’s (half) ‘white’ or because they assume he is white, well, they’d have to deal with me.

That is — after my son was through calling them the racist hypocrites that they are.