Another cake crisis. But the left won’t EVER touch this one.

Do you remember at the end of July during a press briefing when newly-minted Press Secretary Sarah Huckabee Sanders read a cute letter from a 9-year old fan of President Trump?

The Media (D) went mental. It was a cute, sweet letter of a young boy that admired the President and wanted to be his friend.

But everybody does it. And it’s not like propaganda is always a bad thing.

They read this letter to humanize a President that the Media (D) continually demonizes. That seems like an appropriate response, actually.

And it definitely wasn’t, this.

Yeah, that sends a chill down your spine rather than a ‘thrill up the leg‘, amirite?

At the July 26 White House press briefing, Press Secretary Sarah Huckabee Sanders read a letter from a boy named Dylan who said Mr. Trump was his favorite president. When she later released the letter publicly, the boy’s last name was blacked out. The only identifying clue was that everyone called him “Pickle.”

The media scrambled to verify the letter’s authenticity, and the next day, The Washington Post confirmed it was sent by 9-year-old Dylan Harbin of California.

The crack team at the Washington Post was able to identify a 9-year old Trump fan just from his nickname.

Still no ‘Russian collusion’, though.

Here’s Dylan and his mom on Fox & Friends:

The Washington Post also reported that Dylan had requested a Donald Trump birthday cake, but his mom had to make one herself because she couldn’t find a bakery that was willing or able to make one for him.

Here is the photo of ‘Pickle’ and his cake: 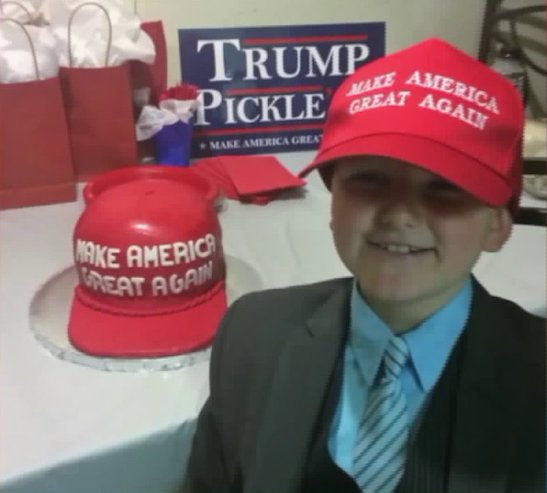 But I’m old enough to remember that there was some sort of hullabaloo when Barry was President about a Christian Bakery refusing to bake a cake for a gay wedding.

This is soooo not the same thing.

This is cake for a 9-year old’s birthday party and he happens to be a fan of the current, sitting President.

How is that controversial?

Only in Leftist la-la land is this acceptable.

They are fine with forcing Christian bakers to bake wedding cakes against their firmly held religious convictions — protected by law — but because they have made President into ‘Literally Hitler’ due to his Republican policies, well, you can’t force a cake artist to make a ‘MAGA’ hat cake! That’s against their human rights. I’m sure they’d somehow call it slavery.

As far as bakeries choosing for themselves what they will and won’t do — go for it, man! This is America!

You can open or close your opportunities as you see fit.

And then customers can decide if they like that or not.

It’s called a ‘Free Market’ and it’s a beautiful thing.

My problem is that the controversy seems to lie with who it is that is President. Really, could you imagine a refusal to bake an Obama cake?

What would the reaction be?

The Left wants it both ways — to have the freedom to do whatever they want and not be criticized while stomping on the rights and freedoms of those that disagree with them.

That’s not how it works in America.

The Left is now saying that President Trump is just like Kim Jong-Un with his state-run propaganda.

You’d think the Left would love propaganda — they’ve cornered the market on it with their liberal ‘bubbles’ at almost every mainstream Media (D) outlet.

And the ‘tolerant’ liberal democracies the Leftists looooove like Canada and the United Kingdom have the CBC and BBC — both state run media outlets.

It’s because we’re finally getting to them.

They’re losing the narrative and they know it.

But as we saw with Jim Acosta, they’re going to fight tooth and nail to keep up the ‘Resistance’.

Rest assured, though, that they never will explain why it’s ok to harass a Christian baker about a gay cake, but not a leftist baker to make a 9-year old’s pro-Trump birthday cake.

The thing is, rational people will see this hypocrisy and realize that the left is just a mess of ideological ‘litmus tests’.

And that’s how we’ll get President Trump reelected in 2020.