The new NFL season started on September 10 with several players continuing the Kaepernick anthem protest. One coaching legend has something to say about that…

Mike Ditka has a pretty interesting take on the NFL anthem protests, and it encapsulates the American Spirit.

‘There’s a time for everything,’ legendary former Chicago Bears and New Orleans Saints coach Mike Ditka told TMZ when asked about Monday’s game on the anniversary of the September 11 attacks. ‘Before a football game is not the time or place for it—period.’

Why do we need to politicize all the things?

Can’t we just have a football game without being lectured on alleged ‘systemic racism’ and identity politics?

I’m old enough to remember when Americans could put aside their political differences and enjoy watching a game together.

Ditka says that although he disagrees with the protesters, he says that it’s their right to not stand and that they’re ‘malcontents’.

This year, Ditka hopes to see all of New Orleans and Minnesota’s players on their feet during the anthem.

‘The majority of people are going to understand what 9/11 meant, what this country stands for, the values that we have, and they’re gonna go in that direction,” Ditka said. ‘You can’t stop everybody. There’s always gonna be some malcontents. So let them be malcontents, let them do their thing. They’ll move on. Nobody will think about it. Nobody will remember who they were. The fact that they didn’t stand for the national anthem, that’s their own right to do that. They have a right to do anything. I just disagree with it.’

Ditka’s hope for the Saints and the Vikings to not protest were well placed as neither team has been known to protest before.

‘You have to show some respect, especially in this position that we’re in,’ Boone told the Minneapolis Star-Tribune. ‘We’re playing a game for a living. … You see all these pictures of these veterans that have no legs and they’re standing up [from] their wheelchair. … It’s shameful.’
Source: Daily Mail

When it came to game time on the 16th anniversary of 9/11? Players on both teams were all ‘stand-up guys’.

Members of the Minnesota Vikings and New Orleans Saints stood during “The Star-Spangled Banner” on Monday night, opting against partaking in the national anthem protests that have occurred throughout the NFL. —Bleacher Report

The athlete-activists that are making millions to play a game for our entertainment are disrespecting the many non-millionaire members of the military whose sacrifice has protected the flag and this country and given them the freedom to protest.

It is also disgusting that these NFL elites continue to protest the law enforcement officers that are doing their job to serve and protect citizens while disregarding the problems that plague many communities in our country and make particular neighborhoods unsafe.

Ditka is right, though.

You’ll always have malcontents and they’ll move on eventually.

These players won’t be remembered anyway.

Colin Kaepernick should’ve put less effort into being an activist and more into improving his game.

Do you think it was his political stance alone that has him on the outside looking in?

Maybe it was his performance on the field that was the problem.

Don’t overthink why Colin Kaepernick is still a free agent. Simply put, years have passed since he was an effective quarterback. He is 29 years old, has succeeded only in an unsustainable scheme and is part of a well-populated group of former starters who also remained available as the week began…

…To blame Kaepernick’s unemployment on his protest is to misread the way NFL teams make personnel decisions.

While it would be naïve to think every owner and general manager approved of Kaepernick’s protest, or that it never influenced their perception of him, it’s important to understand priorities. Teams are swayed first by a player’s potential (or lack thereof) to help them win. Protest or not, Kaepernick would be under contract now if he had played demonstrably better in recent years.
Source: ESPN

Look at him now — he’s an activist, but no longer a pro-football player.

And soon, we’ll all forget who he is.

Instead of having Colin’s name on our lips on the anniversary of 9/11, wouldn’t it be better to be talking about the contribution of this guy? 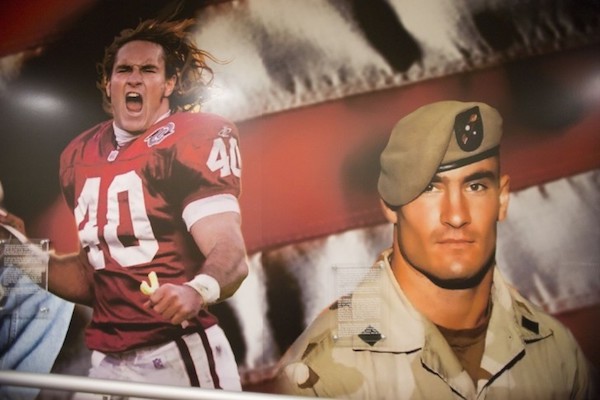 He’s Pat Tillman. If that name doesn’t ring a bell, maybe you should look him up.