It’s bad enough that all the leftists turned the Emmys into an antiTrumpfest. But Dolly, too?

Dolly Parton teamed up with Lily Tomlin and Hanoi Jane Fonda to have a little ‘9-5 Reunion’ and give out an award.

The trio walked onstage to applause, but it took all of twenty seconds once they reached the podium for the anti-Trump hate to start by Fonda.

There’s an old Latin proverb that fits this situation perfectly — qui tacet consentire videtur.
It means ‘he who is silent is in agreement’.

Jane Fonda, Lily Tomlin and Dolly Parton, came on stage to present an award and made a joke about their 1980s movie 9 to 5, at Trump’s expense.

Tomlin and Fonda said in 1980 they didn’t put up with a ‘sexist, egotistical, lying, hypocritical, bigoted boss’ and they won’t today either, in a clear knock at Trump.
Source: Daily Mail

As a Christian and a Conservative, many of her fans felt that Dolly shouldn’t have participated in the Trump-bashing. Some have come to her defense, claiming she didn’t participate, but many others believe that she should have said something instead of letting the two anti-Trumpers get their political message out.

And they’re letting her know exactly how disappointed they are on social media.

Dolly’s Facebook page is plastered with heartfelt messages ranging from disappointment to outrage. 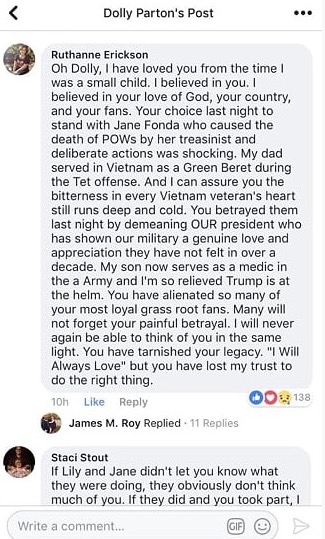 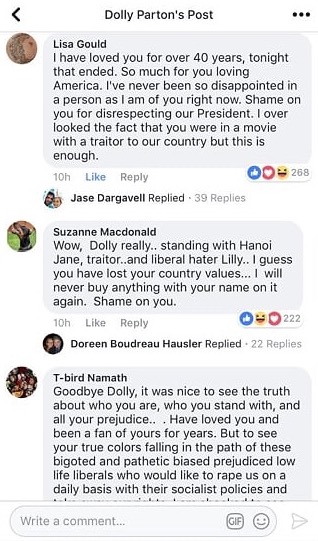 Do you think this will hurt her career?