Let’s see what you’re REALLY made of, Jimmy!

Jimmy Kimmel — alleged comedian — has turned himself into a one-man super PAC.

He has thrown any pretense of comedy out the window, and has filled the monologue with lectures, tears, and whatever talking points he and Chuch Schumer have agreed on.

He should probably register as a lobbyist.

So last week, he spent all his energy on telling us how Democrats are good and Republicans are bad because of the Second Amendment.

He might want to read this — a teenage kid was able to blow up that narrative:
Teen Takes Daft Liberals To The Woodshed Over Gun Grabbing And It’s PERFECT!

He used his own kid as a political prop in the Health Care debate.

He uses emotion, not logic, to mock people who don’t agree with him. Becuase that’s the go-to approach of Liberals.

Alright then, he’s decided to be political. And we’ve seen how he hammers Trump for faults real and imagined.

Don Trump Junior hit him with Twitter (and not just him).

Great I look forward to your monologues next week. You're probably due for a change if only for a moment or two. https://t.co/hoEbRApHeT

He was on a roll, asking where all big-name Hollywood voices are…

Weird. They seem to always have comments about everything else? Maybe they finally moved to Canada??? https://t.co/wgZx8KGGpo

Called out Hillary – after all, he WAS a big donor… 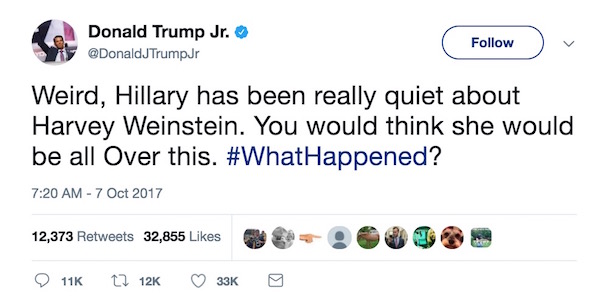 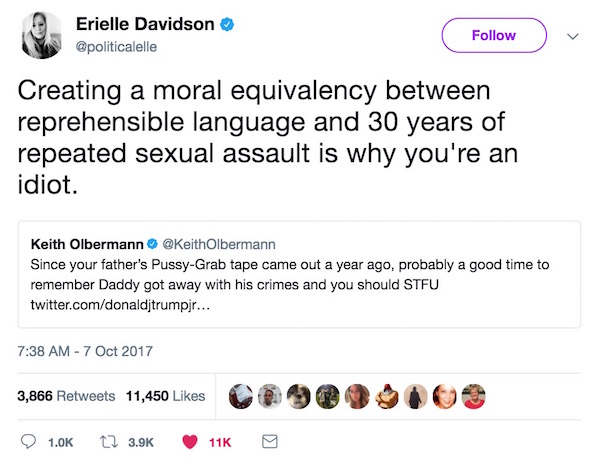 So, we’re starting another week. It won’t be long before the late-night hosts need new material. Will anyone have material that slams Weinstein over something with an overwhelming body of evidence, and even the admission of the guy himself — with the same force that they denounced the President over what he said over essentially a hot mic?

We don’t even know if it’s true. Sometimes braggarts lie. And since they call Trump both a liar and a braggart, you’d think that would have occurred to them. But that narrative won’t push itself, right?

This week, as the late night show hosts step up to the mic, we shall see what is ‘worth’ their time to talk.

Do they have the courage to ‘speak truth to power’ in their own ranks? Or have they entirely abandoned the artistic role of comics, and truly ‘sold out’ their craft.