Some children never get past the ‘hold their breath until they turn blue’ stage. Exhibit A.

Lemme guess… they’ll be chanting ‘This Is What Democracy Looks Like’, right?

Badly misnamed ‘Antifa’ (their own behavior is far more fascistic than anyone they oppose) is calling for massive ‘protests’ across America this weekend.

Unaccustomed to being told ‘no’, these entitled little prisses think they deserve some sort of a veto over the Democratic Process just because they dislike the outcome.

Have you guessed already? Their ‘demand’ is that Trump and Pence be ‘removed from power’.

Because like every other Socialist movement, they want to concentrate political power in the hands of a small group of political allies, and to Hell with everyone else.

“Show this damn Trump and Pence regime that they do not rule over us,” one organizer said in a video posted on Facebook. “Let us stand together, come together, and fight this regime on November fourth.”

“’This Nightmare Must End’ captures how millions of people feel right now…where you may face persecution or even death,” said Andy Zee, a member of the advisory board of Refuse Fascism, according to the Revolutionary Communist website.

Zee called for a “ferocious struggle” because “normal forms of petition (like protest as usual) DO NOT APPLY with Trump.” Recently, several members shut down a Los Angeles highway with “Nov. 4 It Begins” signs in a show of “non-violent civil disobedience.”
Source: FoxNews

Seeing Antifa’s Quixotic opposition to the duly-elected President, the following should come as no surprise: 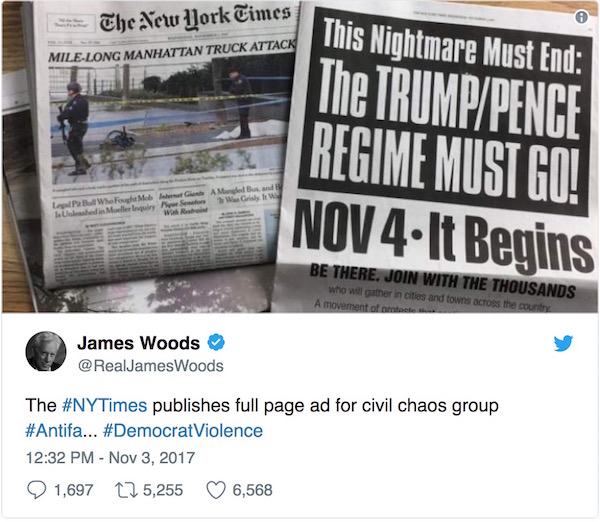 Refuse Fascism ATL’s poster asks Atlanta demonstrators to bring “pots and pans” with an image of a pole poked through Trump’s severed head, drawn as a pig’s with flies buzzing around it.

Chicago’s invite includes an image of a rope pulling down a Trump statue, which is already cut in half.
Source — AmericanNewsHub