Well, this is awkward…

The Air Force admitted that they did not submit Devin Kelley’s criminal history into the federal database and it was this failure that allowed him to legally purchase firearms.

That’s why we need to make sure that we’re the ones packin’ heat.

Doug explains it all right here:

Kelley was dishonorably discharged from the Air Force in 2014 after domestic assault against his wife and young stepson.

In 2012, while stationed at Holloman Air Force Base in New Mexico, Mr. Kelley was charged with assault, according to Air Force records, which said he had repeatedly struck, kicked and choked his first wife beginning just months into their marriage, and hit his stepson’s head with what the Air Force described as “a force likely to produce death or grievous bodily harm.”

“He assaulted his stepson severely enough that he fractured his skull,” said Don Christensen, a retired colonel who was the chief prosecutor for the Air Force, adding, “He pled to intentionally doing it.”

Prosecutors withdrew several other charges as part of their plea agreement with Mr. Kelley, including allegations that he repeatedly pointed a loaded gun at his wife.
Source: New York Times

Despite this, the Air Force didn’t submit the information into the federal database that would prevent this obviously violent thug from purchasing firearms.

Had they entered the information, it would mean that Kelley would have been barred from legally purchasing a weapon until at least 2019 — as long as he kept his nose clean.

In Texas, anyone convicted of serious domestic assault is barred from buying a firearm until five years after they have been released, while federal law permanently bans domestic abusers from owning a gun, although law generally defers to state. 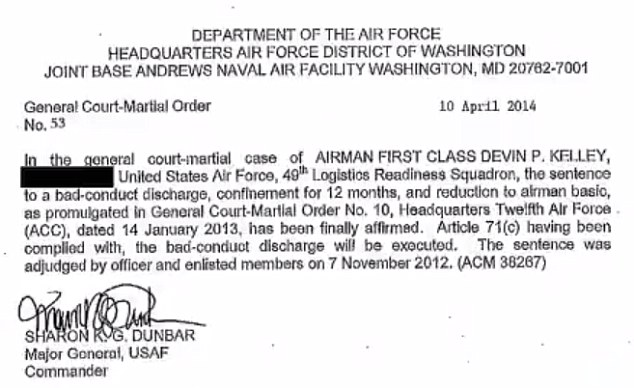 Devin Patrick Kelley, 26, was able to pass all his background checks and legally purchase the Ruger AR-556 rifle which he used to mow down parishioners in Sutherland Springs on Sunday, firing at least 450 rounds.

Kelley, who served in logistics readiness at Holloman Air Force Base in New Mexico from 2010-2014, was court-martialed in 2012 on charges of assaulting his spouse and his stepson who was left with a fractured skull.

He was confined for twelve months at Naval Consolidated Brig Miramar in California as punishment, before being released from the military with a bad conduct discharge in 2014.

Kelley passed his background checks and was able to legally purchase four guns between 2014 and 2017.

They include the Ruger AR-556, which he bought from an Academy Sports & Outdoors store in San Antonio in April 2016, which was later used in the massacre at First Baptist Church in Sutherland Springs, Texas.

He also bought the 9mm Glock and a Ruger 22 which were found inside his vehicle near his body.

Kelley was a violent guy. In 2014, the same year he was charged with domestic assault, he was also charged with beating a dog.

Also in 2014, he was charged with misdemeanor animal cruelty in Colorado after a neighbor reported him for beating a dog. Kelley initially refused to speak with officers about the incident. He denied abusing the animal but complied with an order to pay almost $370 in restitution. He was also the focus of a protective order issued in Colorado in 2015.

There were signs that this guy was trouble.

‘Based on information we received from law enforcement, we confirmed that the suspect purchased two firearms from two San Antonio locations, one in 2016 and one in 2017.

‘We also confirmed that both sales were approved by the National Instant Criminal Background Check System (NICS). We are cooperating with law enforcement as they investigate further,’ the statement read.

Kelley was also a licensed security guard, which means he would have had to pass a background check — even if he wasn’t armed.

The Air Force is in full CYA (Cover Your Ass) mode. They’re now investigating the matter.

In a statement, the Air Force said: ‘Initial information indicates that Kelley’s domestic violence offense was not entered into the National Criminal Information Center database by the Holloman Air Force Base Office of Special Investigations.

We need to be carrying.

We need to be Badasses.