Dear GQ — HERE is a real NFL hero. And it sure as heck ain’t Mr. Pig Socks.

In this upside-down good is bad and bad is good world that we now live in, slacktivist Colin Kaepernick, — whose claim to fame is not standing for the anthem — is showered with praise and named by GQ the ‘Citizen of the Year’, but J.J. Watt, an actual NFL player for the Houston Texans, raised millions of dollars in hurricane relief and a big ‘meh’ from GQ.

The three-time NFL Defensive Player of the Year launched a fund on YouCaring.com to raise money for victims of Hurricane Harvey on Aug. 26 with an initial goal of $200,000. At the time, that seemed like a sizable yet attainable goal. In hindsight, perhaps Watt (and the rest of us) underestimated humanity’s goodwill and willingness to help others in need.

Watt recently closed the fundraiser after raising an astonishing $37,097,298, which is more than 185 times his initial goal. More than 200,000 people donated, meaning Watt got as many donors as he expected dollars.

Watch how he was received by fans: 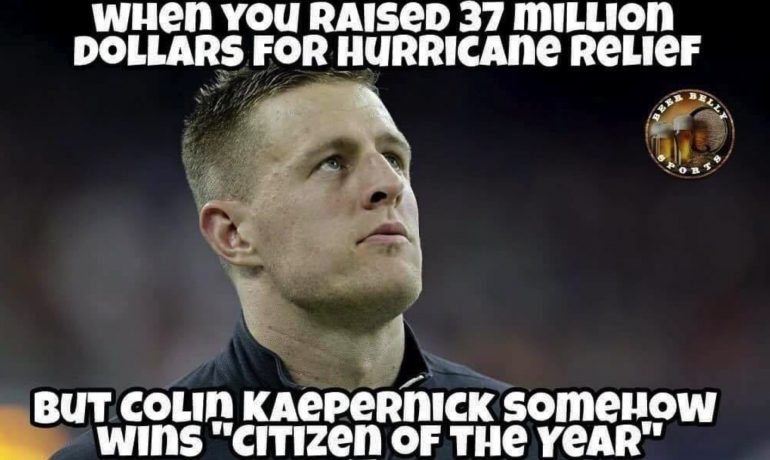 His accomplishment was immense:

This is what we'll be distributing today pic.twitter.com/YVyOC4jRaj

A number of celebrities have contributed to the cause; new Houston Rocket Chris Paul raised $50,000, H-Town lover Drake put up $200,000 and Tonight Show host Jimmy Fallon announced that his program would donate $1 million.

Wear socks depicting police officers as pigs; wear Fidel Castro as a fashion statement IN MIAMI; sue NFL for collusion when gf compares owners to slave owners…
Win Citizen of the Year.
Serve in the US military…nothing. What a joke, GQ. #Kaepernick

JJ Watt raised $37 million for Hurricane Harvey victims. 37 MILLION! But Kaepernick refused to stand for our national anthem (a year ago) and is Citizen of the Year. Right…

Kaep isn’t even the “NFL” man of the year…. it’s this man @JJWatt #ManOfTHeYear pic.twitter.com/p4RDINTFe1

It’s official — Leftism is a mental disorder. It must be.

How else can you explain revering Kaepernick and ignoring Watt?