In a scathing piece, Lt. Col. Ralph Peters has said THIS about the Left’s Military ‘Heroes’.

He says that the Left believes that there are only 2 since 9/11. 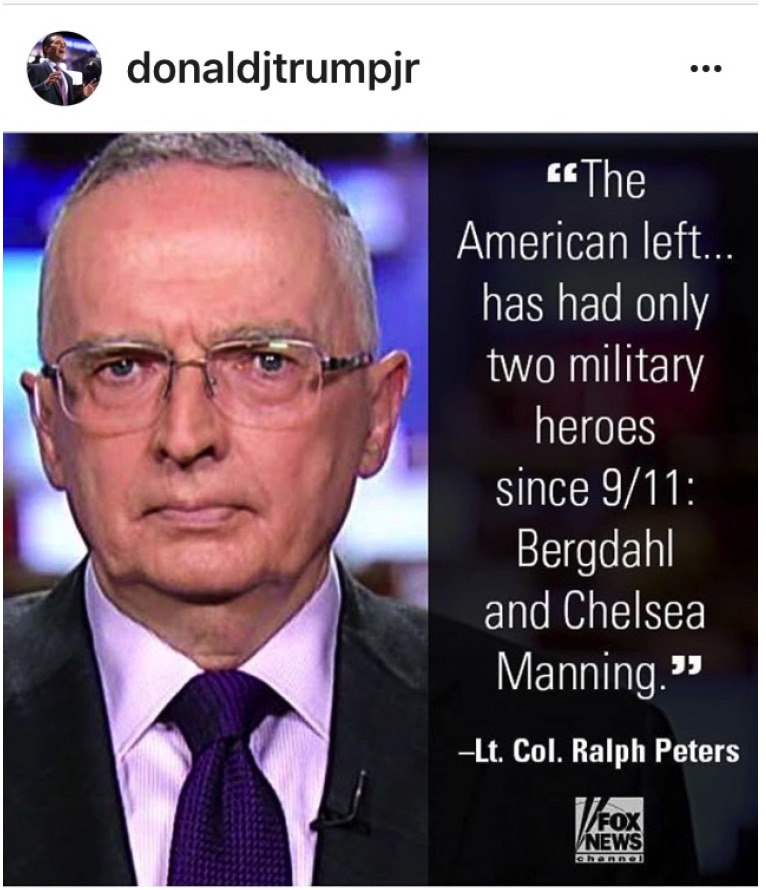 Peters calls Bergdahl, ‘Tali-Bowe’ and explains that his punishment should be as harsh as possible — he called for life in prison because the death penalty, unfortunately, was not an option.

Bergdahl was charged with desertion and misbehavior before the enemy both of which he has pleaded guilty.

There are no mitigating circumstances.

He must be punished, for his crimes and to make an example of him.

Yet, the American left, which has had only two military heroes since 9/11 (Bergdahl and Chelsea Manning), continues to embrace Bergdahl’s very tall tale that he only meant to stroll a dozen or so miles through hostile territory to the next military base so he could report on conditions in his unit—which Bergdahl found unsatisfactory. Based upon the evidence available to this writer, Bergdahl intended to go over to the enemy, whom he had expected to welcome him.

From what Peters writes, it seems that the Left has somewhere between confusion and outright contempt for our military.

The left, exemplified by former President Obama’s White House celebration for the Bergdahls after he gave up five terrorists and, reportedly, cash for their traitor-son, has never grasped why anyone would join our military—a domain of brutes, illiterates, psychopaths and “deplorables.” But leftists do understand why soldiers would desert or betray our country by revealing our secrets.

Bergdahl wasn’t conscripted, he volunteered to join the U.S. military and has clearly shown himself unworthy in character to be a part of such a noble ‘brotherhood of arms’.

It matters not in the least to those who believe this country is not worth defending that honorable service members were gravely wounded in the stop-everything-else search for Bergdahl that paralyzed our war effort in Afghanistan. And it certainly doesn’t matter that those who were on the ground and involved in that hunt believe that as many as six of their comrades died looking for a man whom our military knew from the start was a deserter (a four-star general confirmed it to me within 48 hours of Bergdahl’s desertion, but would not say so publicly—a moral coward who, ironically, got his own comeuppance a few years later).

All that matters now for the left is that Bergdahl “suffered enough” during his five years under Taliban control.

The ‘compassionate’ leftists are strangely silent on the men injured or killed in the hunt for a known deserter.

Of course, those wounded because of him will suffer all of their lives. The dead will never return to those they love. But none of that matters. For the left, that military judge must let Bergdahl go free on humanitarian grounds—thus redeeming Obama’s festive Rose Garden welcome for Ma and Pa Taliban.
Source: Fox News

And that, is exactly what they got.

We’ve just rewarded desertion and the pussification of our military.