Leftists from every walk of life are saying the SAME thing.  It’s ridiculous.

As usual, leftists just don’t get it.

They just don’t seem to grasp the situation. We’ll look at how far off into Left Field they’ve gotten in a meme. But before we come to that, let’s just remind our good readers…

Doug Giles DOES get it:

(And for the religious pacifists and haters who cannot BELIEVE Doug just went there? He’s got a little something for YOU, too!) 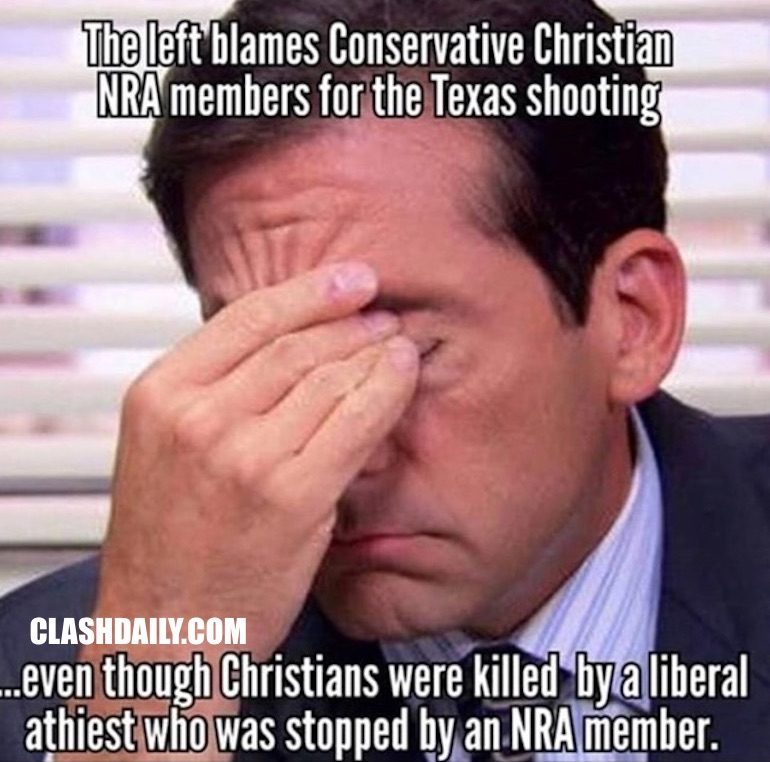 Step 1: Blame  The NRA and call for Gun Control, of course.

How many more have to die before we enact sane gun control laws?

Something must be done. https://t.co/qQppyLk28Q

And they spread outright lies:

There are no background checks on long guns (AR15s) in Texas.

Thanks for the info @shannonrwatts.

I’ll just keep saying it: The NRA is a terrorist organization.

Thanks, @NRA, for helping us focus on the real issues here, literally minutes after more Americans are massacred. https://t.co/umCqUFouKA

THIS HORRIFIC, PREVENTABLE TRAGEDY IS POLITICAL. I won't wait to talk about how lawmakers allow the @NRA to endanger us.

The NRA represents gun manufacturers. They get rich while people die. This is about money and profits, not just the Second Amendment.

The @NRA is soaked and bathed in blood. How do its adherents sleep at night?

Innocent people go to church on Sunday to honor their God, and while doing so, get shot in killed. What country? America. Why? Republicans.

Can you sleep tonight, colleagues, when the price of gun lobby goodwill is this – blood soaked church and school floors, city streets?

CONGRESS- the Horror of #SutherlandSprings is on YOU. BAN #gunstocks NOW. Las Vegas was basically Yesterday! Shameful, complicit,no excuses.

They and this entire nation need so much more from you and your cronies than your "prayers". https://t.co/EjA0cqtnXE

Thoughts & prayers are not enough, GOP. We must end this violence. We must stop these tragedies. People are dying while you wait.

Step 3:  Mocking the ‘thoughts and prayers’ of Christians:

The murdered victims were in a church. If prayers did anything, they'd still be alive, you worthless sack of shit. https://t.co/iGHxPrYrLN

Prayers are what the victims were doing. If you respond to these attacks with prayers but no action, you are protecting the next murderer.

Your fucking prayers didn’t prevent this and they won’t prevent the next one, you cowardly piece of shit. https://t.co/7maKeufPPI

Do you know what comes next?

They were in church. God was with them the whole time.

Their President did nothing to protect them. https://t.co/XhxljskiH5

Here’s what the President tweeted:

May God be w/ the people of Sutherland Springs, Texas. The FBI & law enforcement are on the scene. I am monitoring the situation from Japan.

It was a badass with an AR that chased after the gunman before police arrived.

It’s not the guns that are the problem here.

And as Christians, we need to obey Jesus.