You’d better get a bucket before you read this one because it will make you throw up.

Not just from the mental image, but as a taxpayer.

Rep. John Conyers (D-MI), the 88-year old ranking Democrat on the House Judiciary Committee is also the longest-sitting Congressmen with 52 years under his belt.

What he’s been up to is rather disgusting.

Buzzfeed has obtained documents from conservative firebrand Mike Cernovich, who handed over the info so that it wouldn’t be panned by the Media (D). In the documents, a woman claims she was sexually harassed by Conyers in 2014 and received a settlement in 2015.

Michigan Rep. John Conyers, a Democrat and the longest-serving member of the House of Representatives, settled a wrongful dismissal complaint in 2015 with a former employee who alleged she was fired because she would not “succumb to [his] sexual advances.”

Documents from the complaint obtained by BuzzFeed News include four signed affidavits, three of which are notarized, from former staff members who allege that Conyers, the ranking Democrat on the powerful House Judiciary Committee, repeatedly made sexual advances to female staff that included requests for sex acts, contacting and transporting other women with whom they believed Conyers was having affairs, caressing their hands sexually, and rubbing their legs and backs in public. Four people involved with the case verified the documents are authentic.

Transporting women that Conyer was having affairs with.

Your tax dollars at work, my friends.

But that’s not all, the woman has disclosed how Congress handles sexual harassment claims, and it’s horrible.

“I was basically blackballed. There was nowhere I could go,” she said in a phone interview. BuzzFeed News is withholding the woman’s name at her request because she said she fears retribution.

The woman who settled with Conyers launched the complaint with the Office of Compliance in 2014, alleging she was fired for refusing his sexual advances, and ended up facing a daunting process that ended with a confidentiality agreement in exchange for a settlement of more than $27,000. Her settlement, however, came from Conyers’ office budget rather than the designated fund for settlements.

ClashDaily reported that Congress has paid out millions in the last few years to women coming forward with sexual harassment allegations.

Here is a thumbnail sketch of the process: 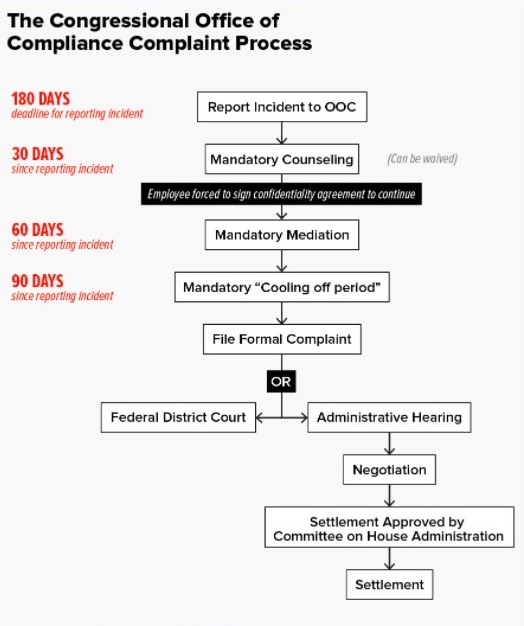 Congress has no human resources department. Instead, congressional employees have 180 days to report a sexual harassment incident to the Office of Compliance, which then leads to a lengthy process that involves counseling and mediation, and requires the signing of a confidentiality agreement before a complaint can go forward.

After this an employee can choose to take the matter to federal district court, but another avenue is available: an administrative hearing, after which a negotiation and settlement may follow.

And how about the 90 day ‘cooling off period’ of working with the alleged harasser after the accusation? That wouldn’t be uncomfortable, would it? The whole process doesn’t seem like it is a positive one for victims.

The process was “disgusting,” said Matthew Peterson, who worked as a law clerk representing the complainant, and who listed as a signatory to some of the documents.

“It is a designed cover-up,” said Peterson, who declined to discuss details of the case but agreed to characterize it in general terms. “You feel like they were betrayed by their government just for coming forward. It’s like being abused twice.”

The woman that came forward made some unbelievable statements about what she was subjected to by Conyer.

In her complaint, the former employee said Conyers repeatedly asked her for sexual favors and often asked her to join him in a hotel room. On one occasion, she alleges that Conyers asked her to work out of his room for the evening, but when she arrived the congressman started talking about his sexual desires. She alleged he then told her she needed to “touch it,” in reference to his penis, or find him a woman who would meet his sexual demands.

She alleged Conyers made her work nights, evenings, and holidays to keep him company.

In another incident, the former employee alleged the congressman insisted she stay in his room while they traveled together for a fundraising event. When she told him that she would not stay with him, she alleged he told her to “just cuddle up with me and caress me before you go.”

“Rep. Conyers strongly postulated that the performing of personal service or favors would be looked upon favorably and lead to salary increases or promotions,” the former employee said in the documents.

Three other staff members provided affidavits submitted to the Office Of Compliance that outlined a pattern of behavior from Conyers that included touching the woman in a sexual manner and growing angry when she brought her husband around.

One affidavit from a former female employee states that she was tasked with flying in women for the congressman. “One of my duties while working for Rep. Conyers was to keep a list of women that I assumed he was having affairs with and call them at his request and, if necessary, have them flown in using Congressional resources,” said her affidavit. (A second staffer alleged in an interview that Conyers used taxpayer resources to fly women to him.)

And still not at the end of the creepy…

The employee said in her affidavit that Conyers also made sexual advances toward her: “I was driving the Congressman in my personal car and was resting my hand on the stick shift. Rep. Conyers reached over and began to caress my hand in a sexual manner.”

The woman said she told Conyers she was married and not interested in pursuing a sexual relationship, according to the affidavit. She said she was told many times by constituents that it was well-known that Conyers had sexual relationships with his staff, and said she and other female staffers felt this undermined their credibility.

“I am personally aware of several women who have experienced the same or similar sexual advances made towards them by Rep[.] John Conyers,” she said in her affidavit.

This dude has been in Congress for over 50 years. How many women has he done this to? It looks like a lot.

It was another ‘open secret’.

A male employee wrote that he witnessed Rep. Conyers rub the legs and other body parts of the complainant “in what appeared to be a sexual manner” and saw the congressman rub and touch other women “in an inappropriate manner.” The employee said he confronted Conyers about this behavior.

“Rep. Conyers said he needed to be ‘more careful’ because bad publicity would not be helpful as he runs for re-election. He ended the conversation with me by saying he would ‘work on’ his behavior,” the male staffer said in his affidavit.
Source: Buzzfeed

The male employee also complained that one of the female employees was ‘too old’ and he wanted to ‘let her go’. Conyers agreed to ‘work on’ his ‘mistreatment of staff’ and ‘misuse of federal resources’ as long as the employee worked directly with him and stopped writing emails and memos recording the problems.

Conyers has been a fierce critic of President Trump, and is a solid leftist — like Al Franken, Bill Clinton, Harvey Weinstein, et al.

By the way, Conyers is the Congressman that represents the increasingly Islamicized area of the country —
Dearborn, Michigan.

Not a surprise, there are some shared values there, apparently.

Report: Common Anti-Parasite Drug Might Be Able to Kill Coronavirus In Only 48 Hours
April 5th, 2020 Flag And Cross

Trump on Why He’s Not Forcing Nationwide Lockdown: ‘We Have this Thing Called the Constitution’
April 5th, 2020 The Mental Recession

Joe Biden: Virus Relief Checks Are Being Held Up Because Trump Wants To Sign Each One (Video)
April 4th, 2020 The Lid