The Democrat he trounced with a flurry of tweets was responsible for the ‘Diversity Visa Lottery’ program that allowed terrorist Sayfullo Saipov to enter the country legally.

Do we really want to leave ourselves open this way? These visas leave the door open for abuse by terrorists.

Doug doesn’t think so, he agrees with our President and says that this P*ssification needs to end:

President Trump hammered the point home in a flurry of tweets after the devastating Manhattan attack.

And he called out Sen. Chuck Schumer (D-NY) by name.

President Donald Trump complained Wednesday morning on Twitter that the terrorist who killed eight people Tuesday in New York entered the U.S. through a program that uses a lottery to award immigration visas…

…’The terrorist came into our country through what is called the “Diversity Visa Lottery Program,” a Chuck Schumer beauty. I want merit based [immigration],’ Trump tweeted.

Here’s a little background on Saipov, the Uzbek national that came to the U.S. under the Diversity Visa Lottery.

Sayfullo Saipov, the Uzbek national who plowed a rented truck through a bike lane full of cyclists and pedestrians on Tuesday, was admitted to the U.S. in 2010 under the State Department’s Diversity Immigrant Visa Program, which awards visas mainly to people from countries that are under-represented in the U.S.

Saipov, whose first name means ‘Sword of Allah’ in Arabic, claimed he killed in the name of the ISIS terror army.

The President then tweeted that we need to ensure that ISIS terrorists don’t enter the U.S. 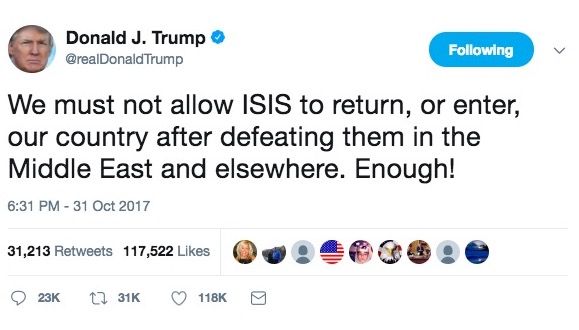 And that we need to have proper vetting of those that want to enter. 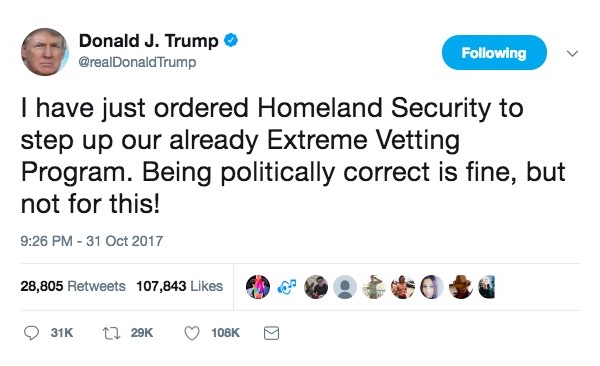 Of course, the Media (D) is going to mention that the President’s tweets this morning were after a segment on Fox & Friends covering the Diversity Lottery Program.

Trump’s comments followed an extended segment on ‘Fox & Friends’ about the lottery program, which has admitted more than 2 million people to the U.S. from Muslim-majority countries.

The State Department currently makes up to 50,000 of the visas available every year.

And who was it that introduced the program? Cryin’ Chuck.

New York Sen. Chuck Schumer, the current Democratic minority leader in the Senate, introduced the ‘green card lottery’ as an amendment to a 1990 immigration bill when he was serving in the House of Representatives.

‘Our immigration policy is suicidal,’ Bongino said. ‘There is no constitutional right to immigration.’

‘How much more diversity do you want?’ he asked. ‘Diversity visa program – how about a United States first immigration program. I mean, really, this is suicidal.’ 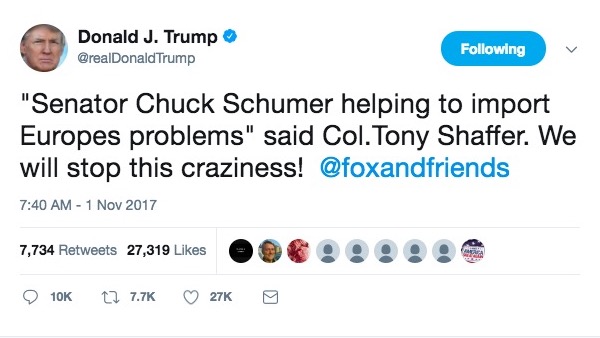 Shaffer had said 20 minutes earlier that terrorists are entering the United States ‘because of the neglect, the political neglect of the last administration – Senator Chuck Schumer importing, helping import Europe’s problems. We don’t want that.’

He said Trump should implement programs ‘to screen properly anybody that wants to come here.
‘It’s not our job to bring the world here. Our job is to protect the American people.’ 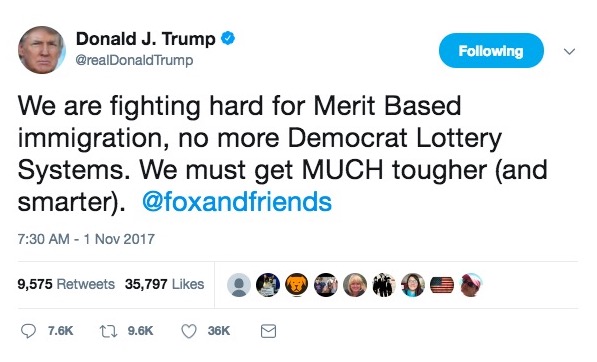 This is simply a matter of different policies held by Republicans and the Democrats.

Democrats think that we should swing open the borders wide and welcome the poor, the tired, the huddled masses yearning to be free and/or run us over with cars for not believing in the same god that they do.

Republicans believe that a sovereign country should be able to choose who it does and does not permit into its country, rather than using some sort of quota system.

Trump has been arguing since March for a purely merit-based immigration system that ignores countries of origin in favor of rewarding foreigners who bring needed high-end job skills to the U.S.

In his address to a Joint Session of Congress, he said such a system would ‘have many benefits: It will save countless dollars, raise workers’ wages, and help struggling families – including immigrant families – enter the middle class.’
Source: Daily Mail

As for Cryin’ Chuck… well, he could use this: