Doug Giles: Entrepreneur, ClashDaily’s Big Dawg, Professional Artist, and all-around badass patriot wrote a tribute to the late R. C. Sproul, one that will have a much different flavor than the more conventional ones that emphasize his ministry.

And — relevant to this post — the co-founder of Warriors and Wildmen also happens to be an ordained Minister. Without further introduction, here is his tribute.

I met Dr. R.C. Sproul in the late 90’s as a student at Knox Theological Seminary. To be honest with you, I had no idea who R.C. was and knew very little about Dr. D. James Kennedy. As a burned out minister, I decided to go to seminary instead of continue down the ministerial path I was currently stumbling down. It was one of the best decisions I’d ever made, chiefly because God had me run smack dab into Dr. Sproul.

Most of my classmates knew Sproul, were at Knox because of R.C. and were in absolute awe of him. Very few would challenge him on anything he said. I challenged him all the time and y’know what … he absolutely loved it. I remember one time I waded into a discussion that was way over my head and he said with a big grin, ‘step into my lair said the spider to the fly.’

Oh, by the way, and as you can imagine, he won every argument with me and he did it with style, logic and a great sense of humor.

Yep, another thing that sticks out to me about Sproul, some twenty years after the fact, is when he trounced me, and it was often, I never felt belittled. He was like a tough coach who wanted a messed up player to play well and succeed.

Aside from the robust discussions we had about theology and philosophy, when I found out that R.C. loved hunting and was an artist, that took the conversation to a whole other level because I’m a hunter and an artist.

Quite often we’d start talking theology and quickly derail into deer and turkey hunting techniques, or he’d ask me about composing a painting, various mediums I used and art history. It was great. Before I left Knox, Dr. Sproul traded me the entire library of the books he had written and a lot of his CDs for a painting I did of a young Rembrandt. I’ve included in this tribute a cell phone pic of Dr. Sproul next to my Rembrandt portrait hanging in his house. Dr. Kennedy also purchased a painting I did of the school’s namesake, John Knox. 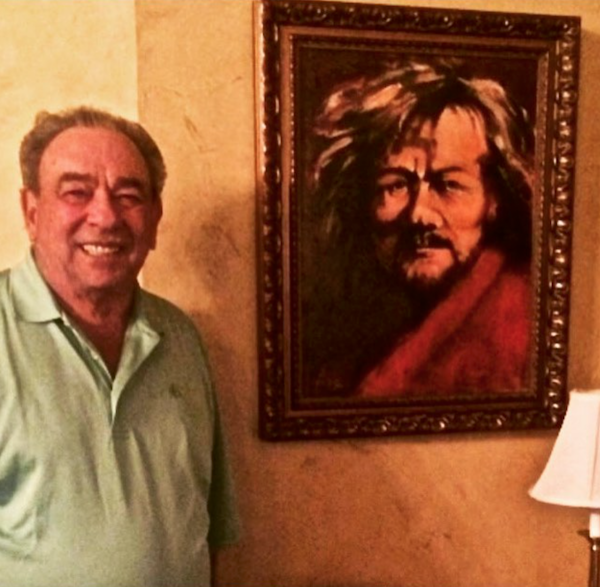 After we both left Knox, I didn’t see him too often. In the early 2000’s I bumped into him at The Christian Booksellers Association with his entourage. He said to me, ‘Giles … I think about you and pray for you every day.’ I replied, ‘Dr. Sproul, Revelation 21:8 says all liars shall be tossed into the lake of fire.’ R.C. said, ‘I’m not lying. Every morning I wake up and I play my piano in our master bedroom and above my baby grand rests your painting of Rembrandt and when I look at it I ask God to bless you and keep you.’

As you can imagine, for a young goofy squab like me, hearing something like that, from a titan of the faith, was way cool.

And that was pretty much the extent of my relationship with Dr. R.C. Sproul.

I had many opportunities to meet up with him again during his epic conferences and cruises but for whatever reason, I chose not to. I was blessed to be able to interface with him in school and between classes and with that, I was content.

Sproul’s love for theology was infectious. Some of his messages on The Holiness of God both awed me and scared the crap out of me. One of the best images I have in my noggin of him was, ‘Sproul At The Chalkboard’: his blue jacket covered in chalk, with his Diet Coke in front of him, always sporting a hearty laugh and enthusiastically taking young hungry students into the rich history of the reformed faith.

If you know any Ryan Seacrest wannabes that could use the wisdom gleaned from sitting under the teaching of Dr. Sproul, get them this: