This criminal fail is embarrassing on so many levels.

And he learned pretty quickly that, ninety-five or not… a marine is a marine. And not to be messed with.

The dog alerted 95-year old Fred to a would-be burglar’s attempt to break down the back door and gain access to the house.

He found a 53-year old Gary Wells staring back at him, and he said Wells threatened to kill his dog if Fred did not hand over his wallet.

In his own words: “I wasn’t scared. I was so damn mad.” Fred refused to hand over the wallet.

They started wrestling, and Fred’s 51-year-old daughter, hearing the scuffle, came to check it out. 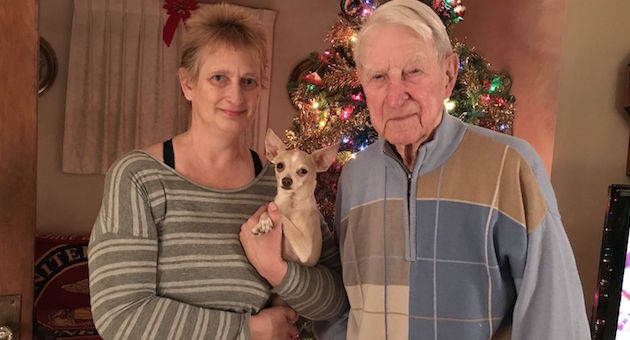 Somehow, Wells got his hands on the wallet, and made a break for it. Fred’s daughter was right on his heels.

“I was mad because of what he did to my dad,” Mary said. “We jumped over two fences and ran through 12 yards. It was just reflexes. I guess it rubbed off from my father.”
Source: TownHall

She caught up with him as he tried to scale a chain-link fence — which wasn’t hard because she described him as pretty slow — and pinned him down until the police arrived.

Police showed up to arrest him, and he was found to have 9 cufflinks associated with another burglary earlier on.

He was charged with a felony.

Fred and his daughter, however, were absolutely badass. We applaud them. They embodied the kind of go-get-em spirit this book was written to inspire: