There have been a few very high profile allegations of sexual misconduct that have been found to be false.

The first is the scandalous Duke Lacrosse case of the alleged gang rape of a black stripper by the white lacrosse players. It was fabricated.

There was the infamous Rolling Stone article ‘A Rape on Campus’ about the young woman identified as ‘Jackie’ that was raped at the University of Virginia.  It was determined to be a load of B.S.  made up by ‘Jackie’ perhaps to get the attention of a fellow student.

The woman whose harrowing account of being gang-raped at the University of Virginia was the centerpiece of a now-discredited Rolling Stone magazine article testified in a deposition heard by the public for the first time on Monday that the story was what she believed “to be true at the time”.

It was her own view of the truth.

“Jackie” said she has trouble remembering details of her assault and the aftermath because she has post-traumatic stress disorder. When asked by an attorney if she stands by the truth of her account, Jackie responded: “I stand by the account I gave to Rolling Stone. I believed it to be true at the time.”

Jackie repeatedly answered “I don’t know” or “I can’t remember” when asked about her meetings with police, discussions with Eramo and specific things she told Rolling Stone. Tom Clare, an attorney for Eramo, pressed Jackie to explain why she told Eramo that she was forced to perform oral sex on several men while she told Rolling Stone she was gang-raped at a Phi Kappa Psi fraternity house.

“My comfort level was different and I don’t remember exactly what I told Dean Eramo or Rolling Stone,” Jackie said.

Jackie said she felt pressured to participate in the story and became scared in the weeks leading up its publication when she realized it might be too late to back out.

So, you know, throw the entire school’s credibility and future opportunities of the accused under the bus because she felt ‘pressured’ to press forward with the fabricated story.  And she walks free — we don’t even know her real name.

And then, of course, there’s Columbia’s ‘Mattress Girl’, Emma Sulkowicz, a performance artist that carried a twin mattress all over campus to show the burden of her alleged rape.

If you haven’t heard of the “mattress girl,” it’s not for lack of trying among liberal opinion-shapers. Emma Sulkowicz, who dragged a blue mattress around Columbia University’s campus in 2014 to dramatize her plight as a rape victim, was profiled sympathetically in New York magazine, the New York Times, and other publications. Senator Kirsten Gillibrand (D., N.Y.) invited her to attend one of President Obama’s State of the Union speeches. Artnet pronounced her mattress stunt (for which Columbia awarded her course credit as an art project) “one of the most important art works of the year,” and she was honored by the Feminist Majority Foundation and other groups.

Her story is this: A consensual sexual encounter with a male student named Paul Nungesser suddenly turned violent. Without warning, he choked her, struck her, and anally penetrated her while she cried out in pain.

The mattress was part of a performance art project, titled “Carry That Weight,” which the senior reportedly conceived as part of her degree. Her project has earned plaudits from some feminists and left-leaning politicians, and condemnation from those who see it as a dubious publicity stunt, a form of harassment and an outright lie.

Guess who was right on this one?

Well, Sulkowicz had support from prominent leftists, the ones that have brushed aside Juanita Broaddrick, Paula Jones, and Kathleen Willey, while ardently supporting the man that assaulted them — and his enabling wife.

‘Mattress Girl’ had public support from the U.S. Ambassador to the United Nations, Samantha Power, as well as lawmakers in Washington.

U.S. Sen. Kirsten Gillibrand (D-N.Y.) has publicly shown her support for Sulkowicz, and even invited the art student as a guest to President Obama’s State of the Union speech in Washington earlier this year.

Just one teensy weensy problem for Sulkowicz — it wasn’t true.  Paul Nungesser, the German student that Sulkowicz alleges raped her, went through years of hell and harassment while he tried to clear his name.  In 2014, he was even pressured to drop out of a scholarship-funded trip to Russia, Mongolia, and China.

Because of Obama’s ‘Dear Colleague’ letter that weaponized Title IX against due process and allowed the kangaroo courts on college campuses to flourish, Nungesser didn’t have a lawyer present to defend him, nor was he permitted to release evidence that would counter her claims.  The civil case that Nungesser filed against Columbia University was settled on July 17, 2017,

And now that one of Roy Moore’s accusers has been found to have doctored her yearbook with ‘notes’, and there are some questions about the motivation of some of the women accusing President Trump of inappropriate sexual behavior, we need to ask about whether or not women that make false accusations need to face the music.

QUESTION: If A Woman FABRICATES Sexual Misconduct Claims Should She Go To PRISON?

We need to make certain that our girls are protected.

Have you noticed that quite a few of these perverts have a (D) after their name?

Dads, it’s time to take a stand against this crap. 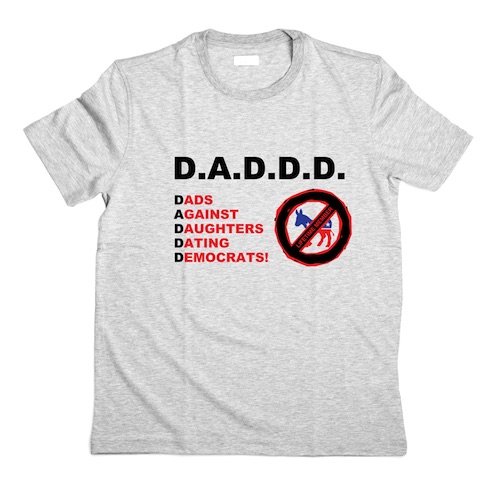 Buy one now and take a photo of you wearing it standing next to your daughter, preferably while you each sport your AR-15s. Then hang that photo in the foyer so that all the would-be suitors will see it.

I guarantee you won’t have a problem.