A tragedy has happened, and it’s finger-pointing time. The activist left went straight to the NRA, while the rest of us went looking for answers. What we’ve learned isn’t pretty.

It’s easy to blame the NRA as the big bad bogeyman.

But as we showed in a column on six lies the left tells about the gun issue, the NRA is hardly the big money player in politics. In fact, it doesn’t even break the top ten.

Even the Chicago Cubs donate more to Republicans than the NRA does, and we never hear anything about Republicans being in the pocket of ‘Big Baseball’.

(FYI- that same article names the biggest single contributor to US politics. Way bigger even than Soros. He’s a Dem supporter with a strong desire to see Trump impeached. So, if we really want to play that ‘bought and paid for’ card, we could gladly just where that takes us.)

Watch Doug Giles break down some of the FBI’s ‘dropped balls’:

We actually learned about other ones since that clip was filmed.

Like the 39 visits the police paid to the shooter’s home.

Or the detailed Jan 5 2018 phone tip to the FBI concerned about him being a viable threat.

Or the Snapchat conversation where he cut himself and wanted to kill people.

Nikolas Cruz cut his arms on Snapchat and said he wanted to buy a gun in September 2016, more than a year before he was accused of killing 17 people in a school in Parkland, Florida, records obtained by the South Florida Sun Sentinel show.

The incident on the digital social network prompted an investigation by sheriff’s deputies and adult welfare investigators from the Department of Children & Family Services.

The documents provide further evidence that Cruz was a troubled teen who repeatedly went without help before he stalked the halls of Marjory Stoneman Douglas High School with an AR-15 rifle on Wednesday.

In another stunning example, the FBI acknowledged Friday that it ignored a tip last month that Cruz was at risk of committing a school shooting.

A person close to Cruz contacted an FBI national tipline on Jan. 5 with concerns about the young man’s “gun ownership, desire to kill people, erratic behavior, and disturbing social media posts, as well as the potential of him conducting a school shooting,” the agency said in a news release.
Source: Sun-Sentinel

And yet, even with all these red-flags, he somehow passed the background check.

Samuel L Jackson isn’t exactly ‘right-wing’ and he had something to say, too. 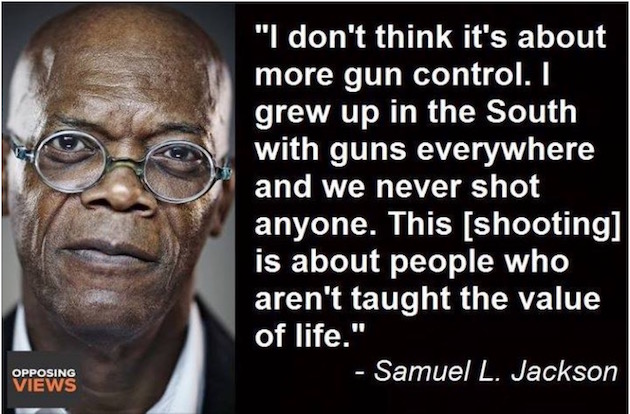 Gee, what a novel idea.

Maybe there’s something to be said about how far we’ve allowed our culture to devalue life.

Question: Who's More Blameworthy For The Valentine's Day Massacre - The FBI Or The NRA?