With Milo starting to ‘tone things down’ is Tomi trying to fill that ‘shock’ vacuum?

It’s one thing to say his speech was ‘flaccid’. (It was, and we even said so. The thing was a train wreck. Or maybe a car crash. He’s a Kennedy, after all.)

But Tomi went straight for the emasculation. Does she REALLY know him well enough to say that about him? We really hope not.

It’s hardly the first time her mouth got her into trouble.

We get that she’s trying to be ‘edgy’. But some insults can look so seventh-grade.

It would make much more sense to mock his position on the wall. Or the optics of a Kennedy taking up a MeToo cause. (awkward).

Like this photo that is popping up in various forms on the internet: 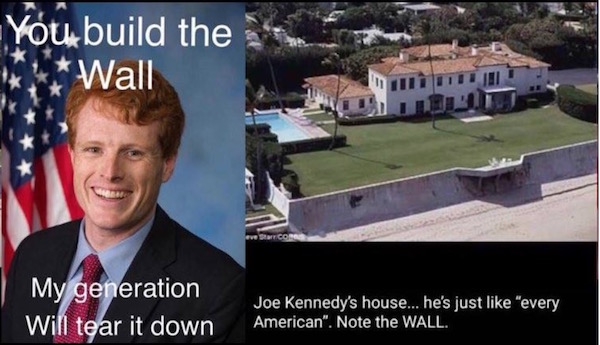 I think maybe he just said he wants that wall torn down, reading between the lines. And that he wants non-Kennedy’s to live on that property. It’s not ‘squatting’ it’s ‘DREAM-ing’, right?

Anyway, she got called out for it. Aaaand, along came the apology:

My comments on my personal Instagram about Kennedy’s response were inappropriate and I take full responsibility for that. I got too upset. I sincerely apologize.

If the shoe were on the other foot, is that kind of an apology something she’d just accept and let bygones be bygones?

Should her apology be taken at face value?

6. Looks like what Tomi was referring to when she posted that Caitlyn/Joe Kennedy photo on her Instagram stories which she quickly deleted. pic.twitter.com/RfjMIC2g9m

She made that comparison the next day. We normally call that doubling-down.

That makes the apology a sound just a little bit — what’s the word? — inauthentic.

Was she forced into the apology? Should she have even given one?

In a day and age where endless accusations are being thrown around against the right, are insults like this just the ‘new normal’? Or should our side be held to a higher standard?

Which one should win out here? Free speech or decency?

Which one should win out here? Free speech or decency?