Roseanne Barr posted what was taken as an over-the-top tweet about former advisor to President Obama, Valerie Jarrett.

In the tweet, Barr said that Jarrett looked like The Muslim Brotherhood and Planet of the Apes had a baby.

A major US network has cancelled Roseanne Barr’s television show hours after the comedian posted a racist tweet about a former advisor to President Obama.

The 65-year-old actress was widely condemned after she tweeted that Valerie Jarrett, who is African-American and advised Barack and Michelle Obama, looked like the ‘Muslim brotherhood & planet of the apes had a baby.’

When she was called out on the tweet, she initially defended herself by saying that Islam is not a race. 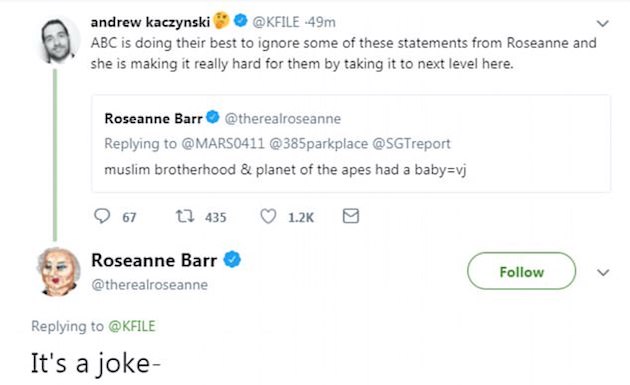 She initially defended herself against accusations of racism by tweeting that ‘Islam is not a race.’

But she later tweeted to Jarrett that she was sorry ‘for making a bad joke’ about her politics and her looks and said she was leaving Twitter.

‘I am truly sorry for making a bad joke about her politics and her looks. I should have known better. Forgive me-my joke was in bad taste,’ she wrote.

But it was too late. Her tweet was noticed by ABC and they issued a statement.

The inflammatory part was the comparison between Jarrett and Planet of the Apes which was seen as blatantly racist. Barr didn’t help when she admitted that she was making the joke about Jarrett’s ‘politics and her looks’.

Roseanne’s mention of the ‘Muslim brotherhood’ in her Tuesday tweet seems to be due to the long-running conspiracy theory that Jarrett is Muslim.

Jarrett, who was Obama’s senior adviser during his presidency, was born in Iran to American parents and lived in Shiraz for six years.

The family had moved to Iran because her father was part of a program that sent American physicians to help developing countries. He ran a children’s hospital.

There has never been any indication that Jarrett or her parents are Muslim.

Rosenne later claimed the comment was a ‘joke’ when she was called out on Twitter by CNN reporter Andrew Kaczynski.

The blue checkmark brigade was out in force to condemn Roseanne: 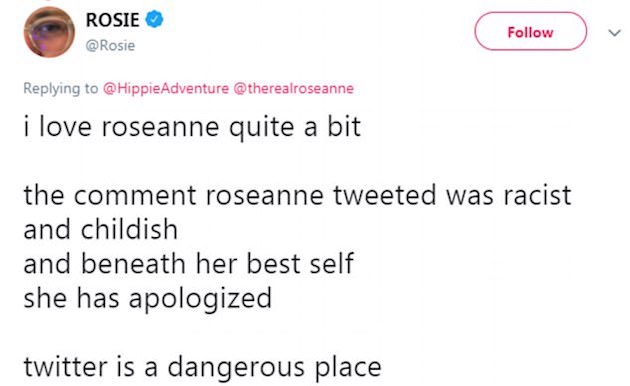 That wasn’t all that Roseanne tweeted today. She also (wrongly) suggested that Chelsea Clinton was married to George Soros’s nephew. 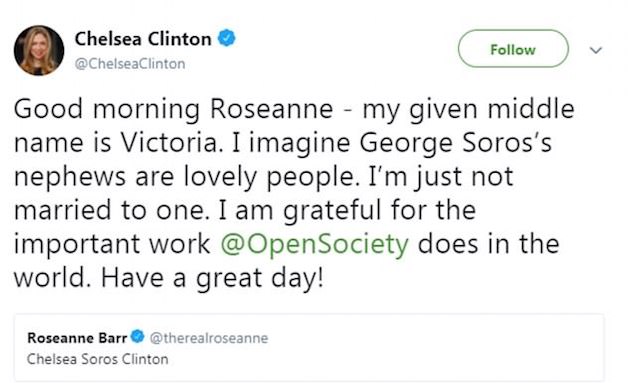 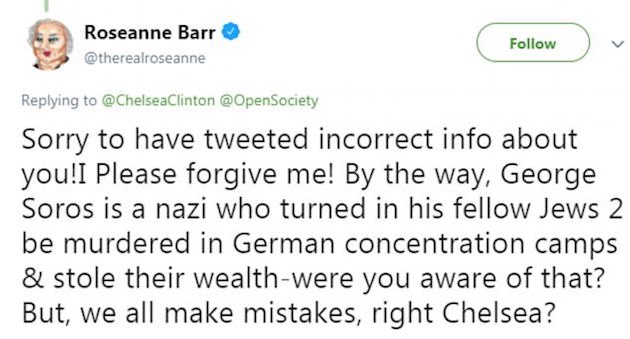 Yep. It was a weird series of tweets.

And it cost Roseanne her job.

But not just Roseanne — her very liberal castmates are also back out of work despite the success of the Roseanne show reboot.

Do You Think ABC Made The Right Decision To Cancel Roseanne?