Hard Leftists following Kanye’s Twitter feed might want to check their blood pressure before they open that app… his wild ride is getting wilder!

We wouldn’t want anyone to get hurt, now.

Not only did Kanye say nice things about a high-profile young woman on the right (which upset them more because Candace Owens is both Conservative and Black, how dare she)…

Don’t pop any corks just yet. He’s not Conservative. Not by a long shot.

What he is, however, is a crack in the dam that says your ideas and thinking shouldn’t be determined by your race.

I haven't done enough research on conservatives to call myself or be called one. I'm just refusing to be enslaved by monolithic thought.

And that is a helluva good start.

Here’s how one of his tweet hit the wife of John Legend (who himself tried to ‘intervene’ after that MAGA hat). It almost looks like she had a stroke mid-tweet. See for yourself. What was she reacting to? Just a little history about the Republicans’ role in helping free slaves, and Democrats’ role in siding with slavers. (Kanye retweeted it.) 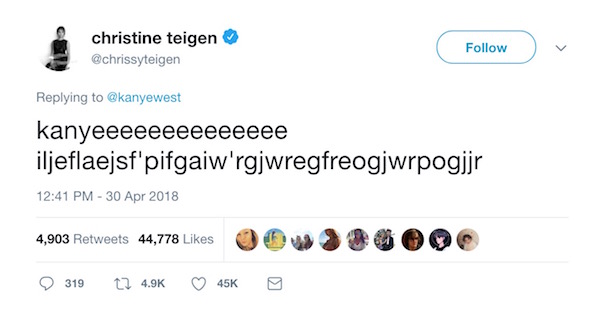 He tweeted that he’s actually looking to engage in big thoughts. Which is evidenced by the fact that he was listening to Dr. Jordan Peterson,  Scott Adams, and now… as he hinted in this tweet with the reference to sociologists:

people have their own voice

He had a private conversation going with the highly-respected Dr. Sowell, and tweeted it.

Sowell’s books are like Kryptonite for the average Intersectional Activist. He’s so heavily footnoted and grounded in researched history that he leaves his critics standing there empty handed, with only emotional objections to his work.

The fifth point in Kanye’s tweet will make a Bernie Bro’s eyes twitch. The other four aren’t much kinder to them.

Socialism in general has a record of failure so blatant that only an intellectual could ignore or evade it. — Dr. Thomas Sewell

He’s one of the most highly respected Black Intellectuals that run-of-the-mill college leftists will never have heard of. His work takes direct attack at the culture of Victimology and Race that has taken over academia, and hits it with the force of a 20-pound sledgehammer.

Whether Kanye ever registers as a Repulblican is not even the point.

He has done something much, much better. He has given his audience express permission to think freely… and that is a wonderful thing indeed. Especially in a world where some would demand lockstep agreement with their own political ideologies.